CHESTNUT HILL, A - Saul B. Cohen, President of Hammond Residential Real Estate, is pleased to announce the Hammond Performing Arts Series 2014-2015 Concert Schedule. The Hammond Performing Arts Series, which is sponsored by The Saul B. and Naomi R. Cohen Foundation and promoted by Hammond Residential Real Estate, is now entering its twentieth season.

According to Saul Cohen, “The Performing Arts Series was originally established by Hammond’s Chestnut Hill headquarters as a means to provide performers, who have launched their professional careers in the past fifteen years, with performance opportunities and to enrich the cultural life of the community.” The series proved so successful in Chestnut Hill, that it was expanded to additional Hammond-serviced communities, including Boston, Concord, Hingham, Lexington, and Weston. In addition, The Saul B. and Naomi R. Cohen Foundation sponsors concerts at Hebron Academy in Maine.

Numerous musicians such as cellist Alexandre Lecarme and pianist Constantine Finehouse have enjoyed the unique performance and recording opportunities that the Performing Arts Series has afforded them. A selection of this season’s performers includes The Boston Cello Quartet, Sarita Kwok and Jan Müller-Szeraws. Many of the series’ participants have performed at some of most highly-regarded venues in the classical world, including Carnegie Hall and Lincoln Center.

Internationally-recognized cellist Jan Müller-Szeraws said of his experience, “Having been featured on the Hammond Performing Arts Series has been a cornerstone in the development of my career. These fantastic concert opportunities have helped me mature and unfold my musicianship in a beautiful and irreplaceable way: by performing in front of a wonderful, knowledgeable and appreciative audience.

“By sponsoring these wonderful free concerts, Hammond Performing Arts Series promotes and embodies the essence and true mission of the Arts, connecting musicians and their audiences through the great masterworks of our chamber music repertoire, at a time when our world is in strong need of the treasure of this true human connection. I am deeply grateful to Saul and Naomi Cohen for their incredible support, heartfelt kindness and deep and powerful vision.”

Mark H. Lippolt, Senior Vice President at Hammond said: “The Performing Arts Series is the primary focus of Hammond’s corporate philanthropy program, and the company is proud to promote these world-class musicians and concerts.” 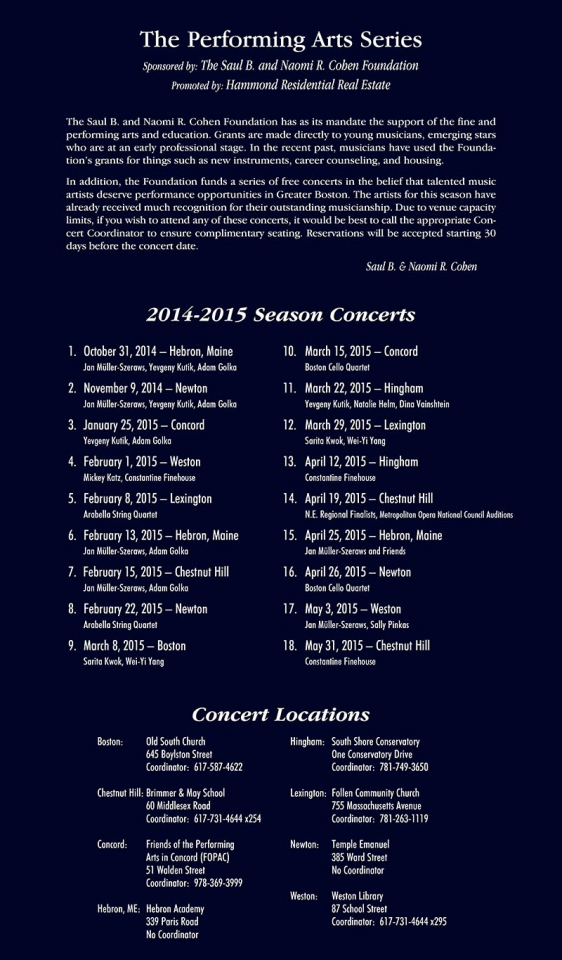 If You’re a Homeowner, You Have Incredible Leverage When You Sell Today