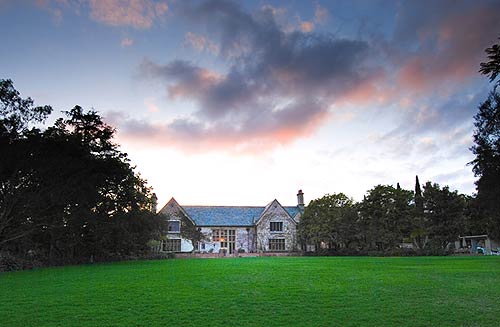 Hugh Hefner and his wife, Kimberley, have sold their personal residence, just a hop away from the Playboy Mansion next door in Holmby Hills, for $18 million. The buyer is Daren Metropoulos, a25-year-old entrepreneur who will be moving from Beverly Hills. The son of equity investor C. Dean Metropoulos, he originally intended to purchase the estate for the value of its 2.3 acres but now plans to keep the 7,300-square-foot English Manor-style house. The two-story home, built in 1929, has five bedrooms and seven bathrooms and sits behind gates on a flat site that backs up to the Los Angeles Country Club.

There is a formal living room, a dining room, a library, his-and-her powder rooms and a media room with a film projector and screen that drops from the ceiling. Interior treatments include maple paneling, leaded-glass windows and a hand-carved staircase. The master suite overlooks the gardens and grounds, which include a swimming pool. Metropoulos, who has worked with his father and older brother Evan from a young age helping reinvigorate such household brands as Chef Boyardee and Bumble Bee tuna, is a fan of muscle cars. The property includes a large motor court and a three-car garage where he can house his collection. Holmby Hills was conceived as a development of exclusive estates by Broadway department store founder Arthur Letts. The Hefner residence was designed by Arthur R. Kelly for the sister of Arthur Letts Jr., the original owner of the Playboy Mansion. It had been listed since early March at $27,995,000.

The Hefners bought the property in 1996 for an undisclosed sum. It was priced then at $17.25 million. Hugh Hefner, 83, is the founder of Playboy Enterprises. Kimberley Conrad Hefner, 47, was Playboy's Playmate of the Month in January 1988 and was Playmate of the Year in 1989. They have been separated for a decade. Joyce Rey and Stacy Gottula of Coldwell Banker Previews International, Beverly Hills, had the listing. Jeffrey Hyland and Rachel Maslan of Hilton & Hyland, Beverly Hills, represented the buyer.