Many who have visited Las Vegas and most of us who reside here have had the opportunity to take the spectacular elevator ride to the 106th floor of the Stratosphere Tower. On the top of the “tallest observation tower in the U.S.,” there are a number of extreme rides for the daring to achieve nirvana. I 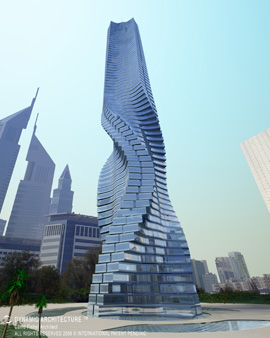 happen to reside much more on the other end of the spectrum. When I go to the Stratosphere, I usually eat at the revolving restaurant, Top of the World. While one dines, the restaurant slowly rotates for a phenomenal view of the Las Vegas Strip, downtown Las Vegas, and all of the surrounding mountain ranges. It is the ideal spot for celebrating special events or for contemplating important life decisions. All in all, it provides an interesting perspective, looking out over the city and rising above the everyday routine below.

How thrilling it would be if a residential building could also rotate. When in Dubai, I met with Dynamic Architecture’s David Fisher, an architect from Florence, Italy. He is the architect of the 80-story Rotating Tower Dubai now underway in UAE, and I had a wonderful opportunity to sit down with David to discuss this unprecedented new building.

When asked how the idea for a rotating tower came to him, David says, "I went to see a penthouse that was on sale in Miami Beach. Asking for the price, I was told 1.6 million dollars. When I pointed to the other penthouse on the same floor the answer was three million. Asking why, the answer was, ‘Overlooking the ocean.’ A week later, at a friend’s apartment in Manhattan, I was enjoying the view from the 31st floor and my friend looked at me said, ‘David, did you notice? You can see from here to the East River as well as the Hudson River—both sides of Manhattan—I am the only one on the entire floor who has such a view.’” David had the thought that it would be wonderful if everyone could see the East River as well as the Hudson River—in essence, to have all views. And the idea of a rotating tower was born.

“Each floor rotates independent of the other floors,” David says. “It takes approximately 60 minutes for a single rotation.” The elevators and all other main systems of the building are located within a central concrete core, which is built by traditional construction methods at the construction site. However, the homes themselves will be assembled offsite—actually outside of Bari, Italy—and then lifted into place by special cables, as opposed to a tower crane. After the various floors are lifted into place, the rotation begins. If an owner purchases the entire floor, they will be able to rotate or stop their floor by simple voice-activation. For example, a special event such as a fireworks display or a lunar eclipse may dictate 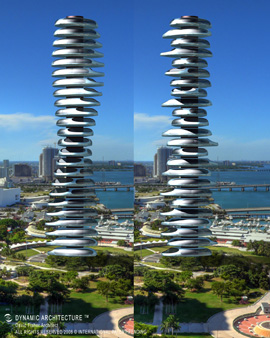 staying in one location, deviating from the standard rotation. This flexibility is marvelous.

As each floor rotates separately and at a different speed, the building changes its shape continuously. “Dimensionally speaking, buildings can be defined by length, width, and height. However, with the Rotating Tower, we’ve added a forth dimension—the element of time,” David says. With traditional buildings, movement is certainly taken into consideration by wind engineers in the planning or design stage. In these cases, the goal is to minimize the building’s sway due to the effects of wind. However, the movement referred to in the case of a rotating tower is purposeful; to add intrinsic value for the inhabitants. The novelty of a “moving backdrop” has proven to have great value in the marketplace. Exactly how much remains to be seen. The current prices of the units in Rotating Tower Dubai are over $3,000 per square foot and range from $3 million to $30 million per unit, and so far 1,100 apartments have been booked. The anticipated completion date is late 2010.

Simultaneously, David is working on several other projects including preparing the launch of a 70-story rotating tower in Moscow as well. No pricing has been established yet in Moscow. “By the way, we do hope to develop one in the U.S.—probably in New York.” says David. “Each tower will have its own shape, defined by the floor layouts and then, of course, defined by the movement of each floor.”

Additionally, there are horizontal wind turbines located between each floor level. It is anticipated that 100 percent of the energy required by the building can be generated by these wind turbines. The excess energy can actually be sold off to nearby buildings or to the electric grid. This is certainly opportunistic, not only for adding to the revenues of the homeowners association, but increasing the ecological health of our planet. The latter of which, these days, must be the mantra of any vertical developer. 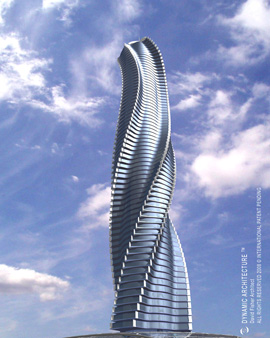 monumental change in how high-rise towers are constructed. I can well imagine that there are some skeptics who scoff at the concept, pointing out potential concerns. I think the concerns of seasoned professionals should be taken seriously and thoughtfully addressed; however, I frankly think the concept is rather bold and fresh. It certainly has appeal from a sales and marketing viewpoint. I have no doubt that there will be issues that arise in the field—while under construction—that will have to be resolved. But this has always been true on any high-rise project I have sold.

From a cultural perspective, the rotating tower can be considered moving art; changing shape and uniquely undulating to an ethereal rhythm. I imagine that the cladding—or skin—of the building will reflect the city around it, and this reflection will only be embellished by its constant motion. Most large cities have sculpture gardens and/or large-scale abstract or object art to enhance the urban fabric. This “sculpture” has a dual purpose; it is a living environment on one hand, and skyscraper-size performance art on the other. For the onlooker, I suspect it will be poetry in motion, to say the least.

Thanks to David Fisher, for sharing Rotating Tower with us. My hunch is that the towers are sure to be a quantum leap for high-rise dwellers and fortunate city skylines worldwide.

Until next time, here's wishing you "elevated" sales.

Photo copyrights are reserved to Dr. David Fisher and related to Dynamic Architecture