SAN FRANCISCO, CA - It’s been about two months since the raging Wine County wildfires and assessing the impact on the housing markets is still only preliminary. As we noted in our Bay Area Real Estate and Economic Forecast to 2020, it will take couple of years to understand the full impact of the fires. Unfortunately, wildfires have become a reality of living in California.

Home sales activity picked up considerably in parts of the Wine County in November. Home sales rose by 13 percent in Sonoma County and 24 percent in Marin County, while dropping by 11 percent in Napa County when compared with last November. The year-over-year increases in Marin and Sonoma counties were the largest among all Bay Area regions, while overall sales in the Bay Area declined by 2 percent. Napa’s decline was a continuation of trends seen throughout 2017. On the other hand, between October and November, sales were also up a solid 23 percent in Sonoma County, 17 percent in Napa County and 16 percent in Marin County. Typically, sales slow from October to November, with an average decline between 6 percent and 14 percent in the three counties over the last 10 years.

Figure 1 illustrates the somewhat atypical pattern of sales over the last couple of months. While Sonoma County saw some fluctuation during the summer, the three North Bay counties all posted a monthly November increase, again inconsistent with previous years’ trends. Delving deeper into local Sonoma County markets showed that sales were up by 18 percent in Santa Rosa and by 24 percent in Sonoma Valley year over year in November. 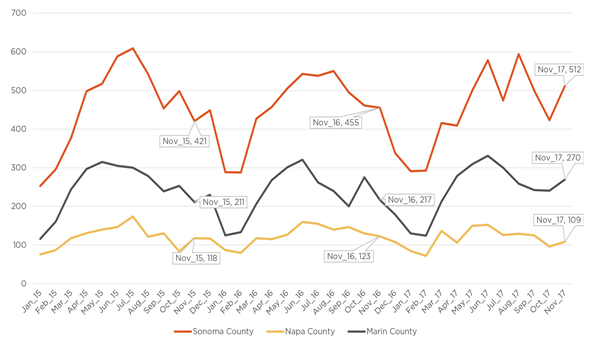 Nevertheless, while sales have picked up, the inventory of homes for sales has continued to fall, but with some important caveats. While overall inventory declined on an annual basis by 10 percent in Sonoma and Napa counties and by nine percent in Marin County, there were 22 percent more new listings in Sonoma County, 20 percent more in Napa County and six percent more in Marin County. Relatively higher levels of expired/withdrawn listings drew overall inventories down. Comparatively, San Mateo County had the largest year-over-year increase in new listings, up 27 percent, while the overall Bay Area had seven percent more listings than last year. While it is not clear that the increase in new listings was purely driven by the wildfires, last year’s level of new listings in November in North Bay was on par with 2015.

The increase in expired or withdrawn listings, especially in Sonoma County, is in large part due to the disorder that follows a natural disaster. Some of the homes could have been burned or damaged, some were offered for lease instead of sale, and some sellers may have decided to wait for the market to calm down. In examining expired or withdrawn listings in October and November that were then relisted in November, there is no clear trend that they were placed on the market for higher prices. On the contrary, out of 33 homes that were relisted in November, eight were listed with adjusted prices, six listed at lower prices and two listed at higher prices than were prior to their expiration or withdrawal. 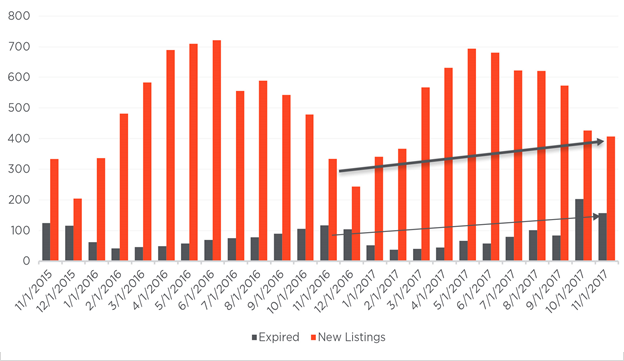 The increase in sales activity coupled with lower inventory led to a decline in the months’ supply of inventory in all three North Bay counties. Figure 3 suggests that Sonoma and Marin counties currently have only a one-month supply of homes for sale if the November rate of sales continues. Inventory in Napa County fell to 2.6-month supply. All three counties, but particularly Sonoma and Marin, have notably less inventory on both a monthly and yearly basis. 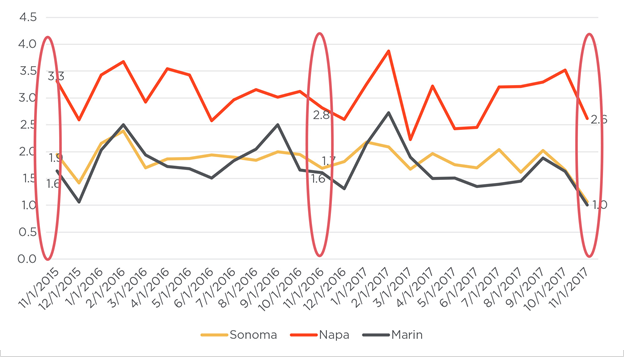 Lastly, and probably most importantly for homebuyers and Wine Country residents, Figure 4 illustrates historical median price trends for single-family homes in the three counties. In November, median prices increased by 16 percent in Sonoma County, 17 percent in Marin County, and seven percent in Napa County year over year. In Marin County, the current median price for single-family homes stood at $1.217 million. In Napa County, the median price was $657,000, while Sonoma County's median price stood at $656,900. Among all Bay Area counties, only Napa and Contra Costa have not yet surpassed previous peak prices, though all have seen prices grow by about 100 percent-plus since the market bottomed out in 2010.

Taken together, it is still too early to fully understand the impacts of the wildfires. It takes time for people to adjust and make decisions on next steps. Clearly, many households are looking for homes to rent or live in, which is driving the immediate demand. As anticipated, already tight inventories have gotten tighter, and homes have gotten pricier. Nevertheless, with slim inventory across the whole region and home prices surging in most parts of the Bay Area in November, it is difficult to separate the impacts of the wildfires from the overall Bay Area market conditions. We will keep a close eye on changing trends in the coming months. 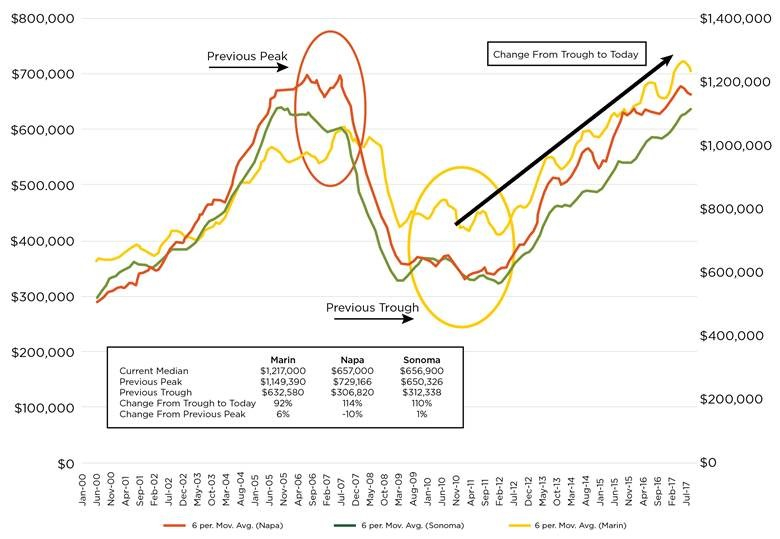