SEATTLE, WA USA – Who’s Who in Luxury Real Estate has launched an exciting new website feature – Matterport 3D Tours are now displayed on listing pages throughout LuxuryRealEstate.com. Website visitors can now have a fully immersive experience as they visit luxury homes online through the Matterport 3D Showcase, giving them a deeper level of engagement with properties.

Matterport is an immersive media technology company that delivers an end-to-end system for creating and distributing immersive 3D and virtual reality (VR) versions of real-world spaces on Web, mobile devices, and VR headsets. Creating a virtual model of a property changes the way that potential buyers can interact with properties for sale from anywhere in the world.

"We are thrilled to support the full 3D experience spearheaded by Matterport," says Michael Edlund, VP of Interactive Media at Who's Who in Luxury Real Estate. "Matterport was an early visionary that saw the potential in VR technologies that are still in their early stages but show enormous potential in letting home buyers attend virtual open houses all over the world, at their own leisure, and as if they were there in person." 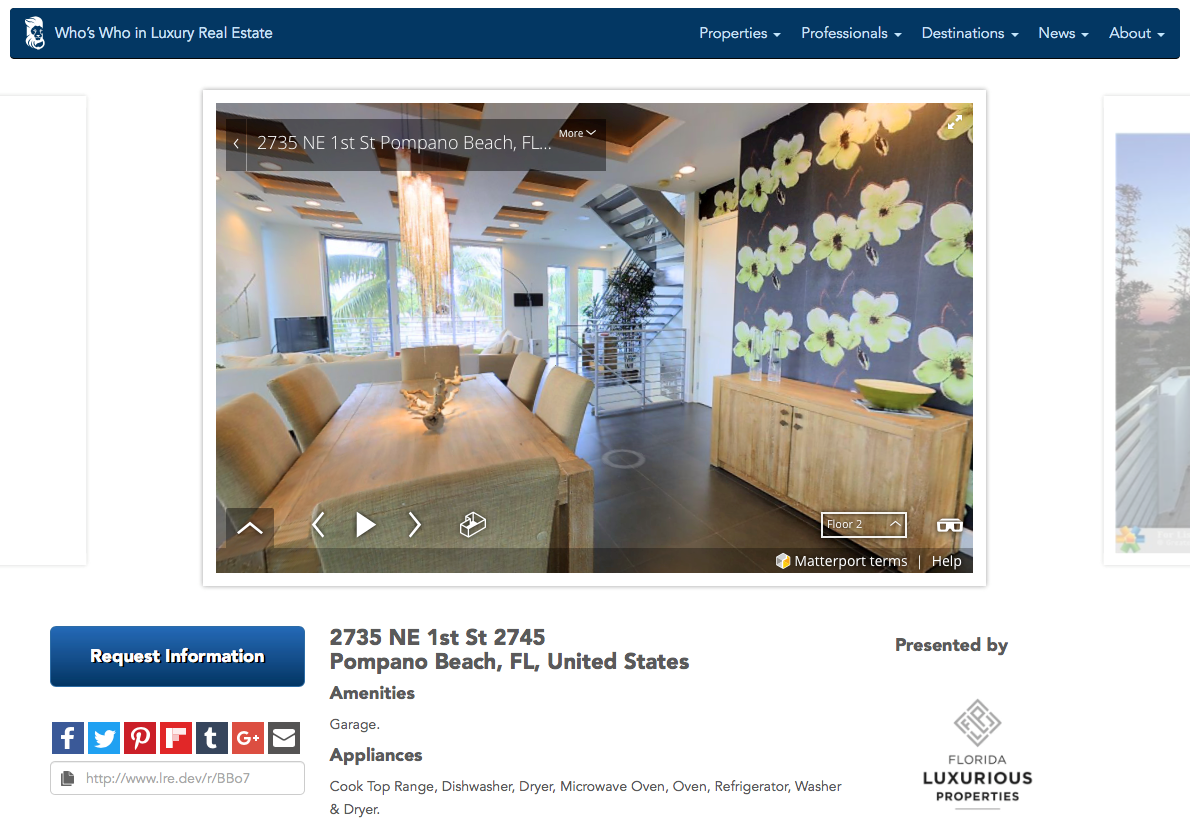 Being able to walk through the actual space in this 3D environment will immerse the luxury homebuyer and bring LuxuryRealEstate.com listing pages farther into the 21st century. On the heels of the release of Luxury Real Estate’s Apple TV App release this March, Who’s Who in Luxury Real Estate continues to stay ahead of the curve and dominate the real estate industry with technological advances.

To view an example of a Matterport 3D Showcase on LuxuryRealEstate.com, visit any of the listings below:

Click play on the screen, then you will be prompted with instructions on how to explore the 3D space.

“Matterport helps real estate publishers like LuxuryRealEstate.com provide a more immersive, real world experience for people looking to purchase luxury real estate,” said Bill Brown, CEO of Matterport. “Both Matterport's 3D and VR experiences will enable their high end clientele to quickly and efficiently tour the homes they are most interested in, from anywhere.”