Atlanta Real Estate Builds on Best Year Ever; Beacham Up 24% in 2016

ATLANTA, GA - Atlanta’s real estate market steamed ahead during the first two months of 2016. The number of home sales in the five county metropolitan area was up 9.4% compared to January and February of 2015, while the average home sales price rose 6.8% to $276,356 according to the local MLS. The robust year-over-year comparisons come on the heels of the best year in the history of Atlanta real estate. 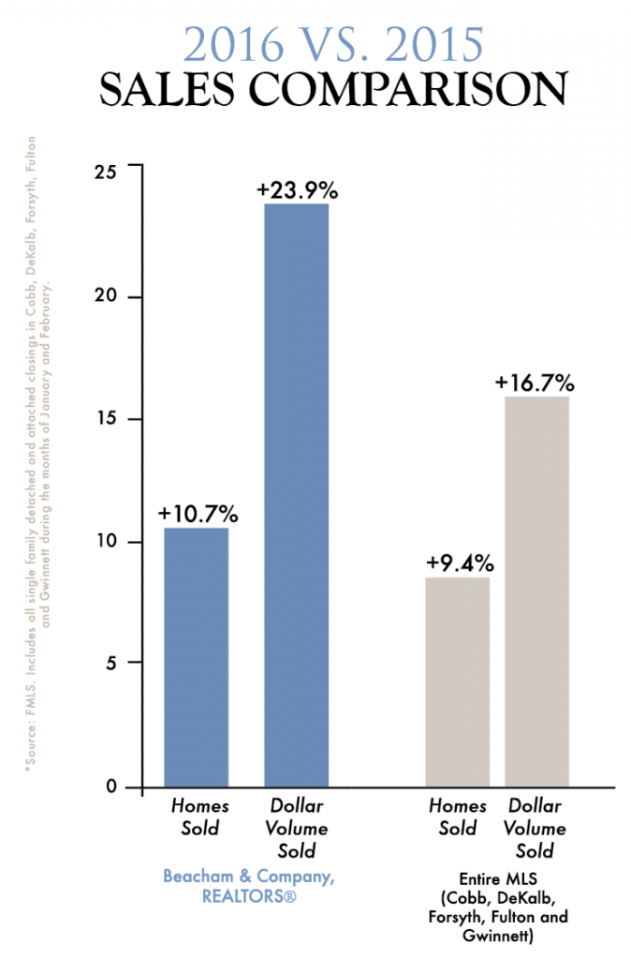 All the news wasn’t positive, however. The housing inventory stock took another big hit in February and is at its lowest level since April 2014 and just 20% higher than the all-time low set in early 2013. The National Association of REALTORS says a healthy market where supply and demand are in balance is when the months’ supply of homes is six months. Atlanta’s current months’ supply is less than three.

Many hot in town areas – Buckhead, Brookhaven and Morningside/Virginia Highlands – actually experienced a decline in sales during the first two months of the year due to a paucity of new inventory hitting the market. In those areas, multiple offers are common for many homes priced less than $1 million.

Beacham & Company continues to ride the edge of the housing wave. The firm’s sales were up 10.7% in the first two months of 2016, while dollar volume sold was up 23.9%.

Beacham & Company is an independent, locally-owned, full service residential real estate brokerage firm that specializes in Atlanta luxury real estate. The firm’s office is located in the heart of Buckhead at One Buckhead Plaza next to the St. Regis Hotel and across the street from Buckhead Atlanta shopping district. With more than 100 licensed sales associates, Beacham is the top selling office in Atlanta by dollar volume of single family detached listings sold and its agents are the highest producing in the city by dollar volume sold.