New York real estate remains hot! That said, the third quarter featured a slowdown in the rate at which mid-priced to higher-end co-ops were sold. While demand remained extremely strong for co-ops priced below $2 million (perhaps because the buy versus rent equation is still favorable), the market between $3 million and $15 million has become more challenging. Inventory is still short, but an increase in time on the market led to increased availability of 6-10 room apartments. Prices, fueled by the brisk sales pace of the second quarter, reached levels at which buyers began to push back. 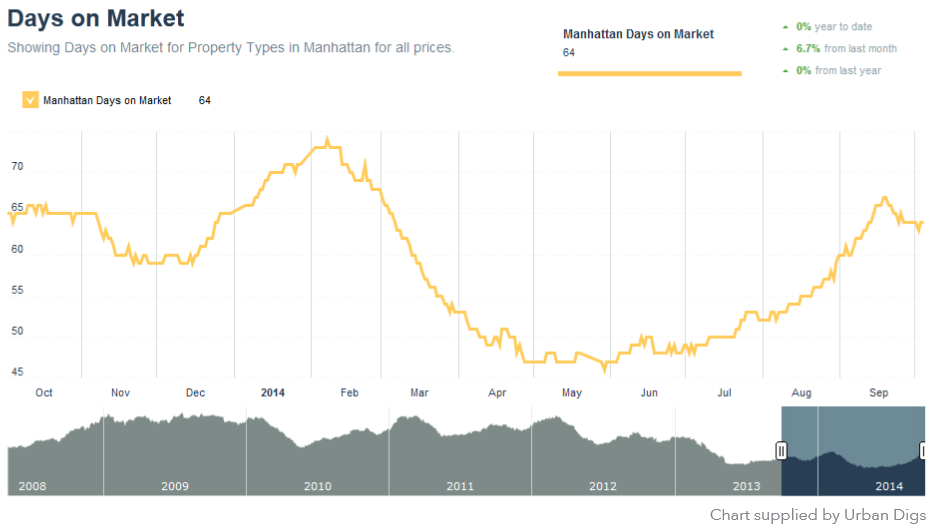 There is still a strong market in every price range for properties in mint condition. But the majority of buyers are displaying a high degree of price sensitivity. If they feel it costs too much, they simply don’t want it. They are willing to wait until the price is reduced – and if the price is not reduced they are not offering. So now the market faces a double challenge in Manhattan: inventory levels which are still historically low while at the same time price levels are holding buyers back from executing on what actually IS available. And even where there is pent-up demand, it tends to be thin: numerous appointments the first week, fewer the second week, two or three the third week. If the property has not sold at the end of a month it is likely that several more months will pass before a buyer comes forward. Within this paradigm there are regional variations. Two and three bedroom apartments on the Upper West Side remain sought after and when priced properly these continue to attract multiple offers, although more likely two or three offers than the eight or ten we might have seen in April. At the same time, trophy co-op apartments on Central Park West, many of which are priced at $8 million or above and in need of renovation, linger on the market for months, even in top buildings like the San Remo and the Beresford. More or less the same seems to be happening with higher end properties on Park and Fifth and in Tribeca, even as new developments in those locations sell briskly. The new condo market remains strong overall, although there is a clear slowdown, noted recently in the press, in the ultra-luxury category. Condo sales are being driven, at least in part, by the desire buyers have for a less invasive entry process than that provided by co-ops and the additional privacy, arising from the ability to purchase in a corporate name or a trust, which condo purchases can provide. And the appeal of the new remains strong, especially when the building is branded with a noted architect, high end finishes, and a compelling amenities package.

Brooklyn remains hot, although even In Brooklyn there are signs that increased prices are beginning to slow down the market. Open houses attract fewer buyers than in the spring, and the level of competitive bidding has definitely quieted down. Brooklyn no longer represents a value play relative to Manhattan, at this point the shoe is on the other foot. Harlem and Upper Manhattan are still the best places to go for big two bedroom condos under $1 million, but who knows how long that will last? Looking ahead, I don’t anticipate big changes during the balance of the year. I doubt that absorption of the available inventory will increase, and seller expectations, especially at the upper end of the market, will almost certainly outstrip the value orientation of most buyers, leaving many high end properties on the market for extended periods of time. We are selling two bedroom apartments for more people, families in particular, who are moving to Westchester or New Jersey, where they can buy a nice house in an excellent school district for the less than the price of a modest Manhattan three bedroom. At the other end of the cycle, empty nesters continue to flock back into town, frequently using their cash assets to buy two bedroom apartments which would otherwise have sold to young couples, who cannot compete with the financial positions of these older couples. Overall, while demand is still outstripping supply except at the very top of the price pyramid, the market shows more balance than it displayed during the late winter and spring. I am glad about this. As agents, we prefer a market where our negotiating skills can be deployed; we like to be able to offer words of counsel more nuanced than “You have to pay more!”