This report documents sales activity for the 3rd Quarter and Q1-Q3 2012 (Year-to-Date) for the upper Roaring Fork Valley - Aspen, Snowmass Village, Woody Creek and Old Snowmass. Included property types are single family homes, condos, townhomes, duplexes and residential vacant land at sold prices over $250,000. Fractionals are not included. It compares the 3rd quarter to the same prior year quarter and to historical data since 2004, and Q1-Q3 2012 to the same prior year period. There are three sections: the Aspen/Snowmass total combined market, the Aspen market (includes small Woody Creek and Old Snowmass areas) and the Snowmass Village (the ski resort) market. The source data is from the Aspen/Glenwood MLS. Abbreviations: Aspen (ASP) - which includes Woody Creek (WC) and Old Snowmass (OSM); Snowmass Village (SMV).

Click here for the full third quarter report in PDF 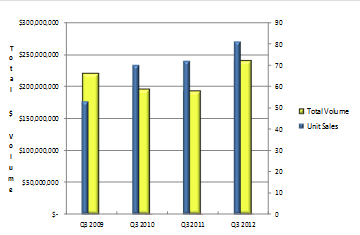 In the first three quarters of 2012, (Jan. 1—Sept. 30th), the total Aspen and Snowmass combined dollar sales volume was off –12%, unit sales were even with last year , 0% change, and inventory of properties for sale decreased –6% compared to the same period last year.

Why fewer ‘big ticket’ sales? A number of new large spec homes were sold at significant discounts in the past 1-3 years by strained developers and builders, and this inventory of highly pressured-to-sell ultra luxury homes has mostly been depleted.

In each of the past three years, after relatively favorable starts at the beginning of year, the national economy sputtered in the 2nd quarters due mostly to uncertainty caused by shifting employment numbers, sovereign debt, Euro concerns, and domestic political impasse.

Sales of Aspen homes were up 46% in dollar volume and 22% in unit sales for the 3rd Quarter over the same period last year.

Single family home pricing pressure appears to have eased through the 3rd Quarter 2012: median prices, generally a more accurate indicator of pricing trends as average prices can be skewed disproportionately by very high or low sold prices, are up marginally, 3% , to $3.8M in Q3 2012 versus $3.7M last year same time; single family home price per sq ft increased +13% to $1,013 sf in Q3 2012 from $899 sf same time last year arresting the downward trend of the past 4 years.

Both metrics — median prices and price per sq ft — can be seen as positive signs of home price stabilization.

Snowmass Village real estate has fallen hard in the past four years. This is largely due to the very real excitement surrounding the resort in 2005-2007 as the Related Companies took over the new Base Village development. The Snowmass resort was to be reborn. As the excitement escalated, so too did prices. Then the crisis hit and it all unraveled.

All of which is to say that unbelievable deals are to be had in Snowmass ...and there are reasons for optimism.

Now, during the off-season - before the high tourist winter ramps up and at the cusp of a clearer path forward for the Base Village - is the time to buy in Snowmass Village.

There has been a dramatic increase in vacant land sales this year and it continues. Through the 3rd Quarter, Sept 30, 2012, there have been 23 land sales this year versus 12 last year same period, +92%. The dollar value of these sales has jumped to $65M this year from $27M, +144%. This does not include the sale of older teardown properties which appear in the MLS as residential property with improvements not vacant land. Buying land and building new offers a reasonable hedge against continued market uncertainty and against the slow pace of an improving marketplace. As there is relatively little new construction occurring at present due to uncertain macro conditions and still difficult but improving loan qualification conditions, by the time one completes construction of a new Aspen home in 18—24 months, demand for this scarce product should be high, supply low and premium pricing a realistic outlook. As mentioned in earlier reports, typically, when land sales start to pick up, it is an important marker of a market transition, a tipping point.