Randall. The buyer has been recorded as The Clarendon Court Trust. The top sale in Newport residential real estate, as well as Rhode Island, was also handled by

Gustave White Sotheby’s Int’l Realty, with the sale of Newport’s “Miramar,” another waterfront estate also on Bellevue Avenue. It closed in 2006 with a recorded price of $17,150,000. The Newport based agency has been involved in 5 of the top 6 sales in the Rhode Island seaside resort.

This iconic Newport treasure was built in 1904 and designed by noted architect Horace Trumbauer as the summer residence for Edward C. Knight, a Philadelphia based sugar manufacturer and railroad executive. The sale also included the abutting two-story brick and limestone carriage house. “It was an honor to be able to represent such a property as Clarendon Court. Not only is it well known here in Newport, but I’ve learned over the course of having this listing that it is also very well known throughout the country. Purchasing Clarendon Court is truly a once in a lifetime opportunity.” Leys said. Glenn Randall and his wife Patricia purchased the property in 1988.

(For a history of Clarendon Court, refer to “American Splendor – The Residential Architecture of Horace Trumbauer” revised ed, by Michael C. Kathrens.) 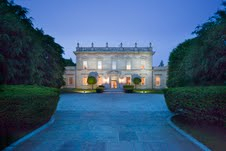 Gustave White Sotheby’s International Realty is a full-service agency specializing in waterfront and luxury real estate and serving all of Rhode Island, including Block Island, as well as southeast Connecticut and coastal Massachusetts. Gustave White has been in business for over 80 years as a leader in the luxury market and is the sole Sotheby’s affiliate for Rhode Island and the Rhode Island Regent member of Who’s Who in Luxury Real Estate. Paul A. Leys, Co-owner of Gustave White Sotheby’s Int’l Realty, may be reached at 401-848-6706 or at pleys@gustavewhite.com for more information.

Tips for working from home