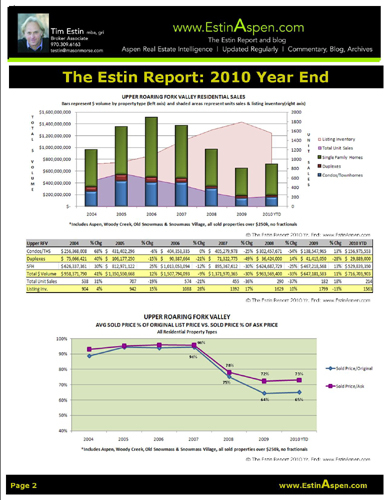 This 2010 year end report is produced with the intent of learning where the Aspen Snowmass real estate market stands at this particular point in time. Over the 2010/2011 Holiday Season, there is bound to be an abundance of chatter, innuendo and incorrect statements making the rounds, and my goal is to set the record straight as to what’s going on based on actual undeniable facts.

The last seven years are truly representative a full market cycle. The good news is that Aspen Snowmass area appears to have seen its peak and its valley and the market is turning upwards. Residential sales throughout the Upper Roaring Fork Valley hit a record high in 2006 with a gross dollar volume of over $1.5 billion. That remarkable year, representing now what looks to have been a unique period in Aspen’s real estate cycles, was followed by a 3 year period of declining sales volume and increasing listing inventory. The market appears to have bottomed in 2009, falling 57% from its 2006 high. In 2010, the overall market has risen 11% in gross dollar volume from 2009, and unit sales of all property types included in this report has risen a convincing 18%. Additionally, the overall listing inventory has declined by 13%. I believe, finally, it can be substantiated that there’s light at the end of a long, painful most recent two years.

Aspen gross dollar sales volume began decreasing in 2007 but average/median prices for condos and single family homes continued to increase through 2008. This increase was followed a precipitous decline in per square foot prices - approximately 20% - in 2009. Average prices per square foot have decreased between 6 and 10% in 2010. Given the national prognosis for an improving slow recovery, it seems likely prices will remain relatively flat, or constant, in 2011, meaning no more decline but also no rise. It would seem reasonable to predict that 2011 dollar volume will approach 2004 levels.

The Snowmass Village sales data show a slightly different trend. Dollar volume in sales increased in 2007 by 10% and only decreased by 9% (vs 37% in Aspen) in 2008. This delay in recessionary activity can be attributed to the Base Village development and the completion and sale of Phase I inventory in 2008. Snowmass was hit hard in 2009 with a decline in sales volume of 70% but the market is recovering significantly from rock bottom with dollar volume and unit sales up over 50% in 2010Average price per square foot for single family homes increased in 2010 by 3%, the only property type to gain value in the Upper Valley. Condos, however, are still declining, down 35% in average price per square foot since the peak in 2007. As we move forward, bear in mind that winter is the prime market season for Snowmass Village.

It continues to be a buyer’s market with seller’s receiving on average 73% of their asking price and 65% of their original list price of one to two years ago. These figures are up just slightly over last years calculations (Chart 2) which indicates that properties listed at a reasonable price point are seeing increased sales activity. It is likely that a property coming on the market in the past year – or now - will be priced more realistically to market than a property originally coming on the market two years ago. Most likely because of this, the sold-to-ask-and-original price gap appears to be beginning to narrow.

In fall 2010 sales activity picked up amidst an improving environment of buyers looking seriously for fairly priced properties and deals, and sellers becoming realistic as what the new normal really looks like. If priced realistically given today’s market, a seller has an opportunity to sell, unlike a year or more ago when values were more difficult to ascertain given the dearth of actual sales comparables. Little was moving, sellers and buyers were at a stand-off and the market was at a stand-still.

Disclaimer: The statements made in The Estin Report and on Tim Estin's blog represent the opinions of the author and should not be relied upon exclusively to make real estate decisions. A potential buyer and/or seller is advised to make an independent investigation of the market and of each property before deciding to purchase or to sell. To the extent the statements made herein report facts or conclusions taken from other sources, the information is believed by the author to be reliable, however, the author makes no guarantee concerning the accuracy of the facts and conclusions reported herein. Information concerning particular real estate opportunities can be requested from Tim Estin at 970.920.7387 begin_of_the_skype_highlighting 970.920.7387 end_of_the_skype_highlighting or by email.. The Estin Report is copyrighted 2010 and all rights reserved.. Use is permitted subject to the following attribution: "The Estin Report: State of the Aspen Market, By Tim Estin, mba, gri, www.EstinAspen.com" 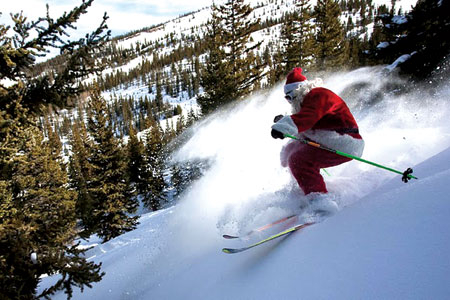 Valle del Sol: The Embodiment of a Lifestyle