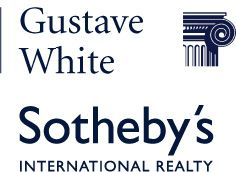 Realtor Jay Serzan was the listing agent. He noted, “The estate attracted two bidders and was under contract within sixty-seven days. This is an example where a well-located property in excellent condition and properly priced can quickly find a buyer.” He added that “Recent activity suggests that high-end buyers see real estate as a good value.” The property was listed in May at $4,795,000.

“Cove Haven” encompasses a 3.67-acre gated site that contains the 4,669 square foot main house plus a pool, pool house, and guest quarters. “The house fronts on Gooseneck Cove and offers panoramic views of the cove and the open ocean across Ocean Avenue,” Serzan said. The house was constructed in 1984 by Jay and Suzie Schochet and was known as “The Columns” because of its distinctive architectural styling.

Mr. Schochet founded the firm that built Brick Market Place on Thames Street. Brick Market Place is a mixed use commercial and residential development that is credited with launching the rebirth of Newport’s downtown waterfront in the early 1970s. [ Source ]

Gooseneck Cove has recently completed an environmental restoration totaling $1.2 million which was spearheaded by Save The Bay. [ Source ]

The sellers are Albert R. Naar and Judith A. Kelly. The buyer is Ladrone, LLC. Annabelle Harris of William Raveis Chapman Enstone represented the buyer.

Mr. Serzan has brokered other neighborhood properties near “Cove Haven.” The most recent was “The Playhouse” at 294 Ocean Avenue that sold for $2,190,000 on July 30, 2010. Mr. Serzan also holds the record for the highest residential sale on Ocean Avenue – the former Van Alen estate, “Avalon”– that sold for $10.3 million in 2004.