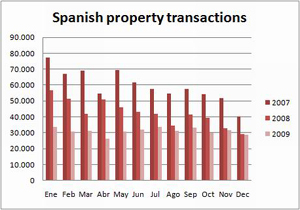 When the first signs of the international financial crisis emerged in the second half of 2007 the Spanish property market had already been in a steady decline for a while. Not surprising, if you consider that almost a decade of feverish growth had led to a textbook case of an overheated market in which builders, buyers, sellers, investors and banks alike became accustomed to the kind of volumes that had never been seen before – and which would prove to be wholly unsustainable.

What followed the financial crisis and accompanying worldwide recession was, predictably, a sharp drop in property sales and prices in Spain as elsewhere. With a particularly overheated market and an oversupply of properties Spain, however, suffered more than most. The golden boy of the past ten years felt the chill winds of recession most acutely, and 2009 was an icy year indeed.

The return of value for money in a market where smart buyers can do very well.

The die was cast, and the year saw a further 27 per cent drop in real estate transactions in comparison with 2008, bringing the total decline in relation to 2007 – when 715,000 properties were sold – to 48 per cent. As we entered 2010, however, the decline seemed to have halted, bringing monthly sales levels to around 30,000, a figure generally regarded as the hollowing out of the market. From here on out, there should be a gradual increase over the next two years, driven above all by the return of value for money in a market where smart buyers can do very well.

The overall impact on real estate has been a drop in prices ranging from a few per cent in some cases to over 50 per cent in more extreme examples. Those so-called distressed sales have received a lot of attention, though they represent just one of a rather diverse range of factors that combine to cloud the overall issue of property values in Spain.

As an overall average, prices have dropped by around 25 per cent from their highpoint in 2006/2007, yet look at individual markets – and sometimes even adjacent properties – and their asking prices may vary considerably. The reason is that while one person may not have the absolute need to sell and will therefore hold on to a higher asking price, another may have to sell very urgently and potentially at a loss.

On the whole, properties in less attractive locations, featuring poor construction and perhaps badly maintained urbanisations, suffer the greatest drop in demand, while quality homes in prime locations have maintained their market. It means that there is still a significant market if the product is right – and if the price is sensible. The demand for such real estate, by the way, is growing steadily, as investors and end-users regain their confidence in the Spanish property market and realise that now is the time to buy at future gains.

January 2010 saw average overall property prices in Spain rise for the first time in 24 months, albeit at a very modest 0.6 per cent. Within this trend, the Valencia region was among the better performers in the country, registering an increase of 2.2 per cent on the month before. It heralds the beginnings of a gradual recovery in a region whose property market is blessed with optimal diversity that includes important primary, secondary and commercial sectors.

“While it is clear that we have reached the low-end of the cycle and that life has returned to the market, it is also evident that this will be a slow and gradual recovery,” says Inmobiliaria Rimontgò CEO José Ribes Bas. “In the general market there are large stocks of unsold property to be absorbed first, and this will take some time. In the higher end of the market in which we specialise demand has been far more consistent, although it remains a buyer’s market and this means that buyers seek out quality real estate that is competitively priced.”

“We have entered a period in which buyers with liquid means and access to financing are in a very strong position to benefit from attractive prices – acquiring more home for their money and a very good mid to long term investment. For people like that the coming two years will be the best time to buy property.”