SARASOTA, Florida—(May 20, 2009)—It was all in a day’s work for Steve Harney and Matthew Ferrara—two of the most sought-after motivational speakers in the real estate industry. Harney and Ferrara travelled to Sarasota last week—at the behest of Michael Saunders—to address a daylong gathering of more than 400 of her company’s agents and managers. At the event—themed “Reinvent Yourself” and held at the Chelsea Center in Gulf Gate—the pair of experts engaged the standing-room-only audience of agents and managers with plenty of things they wanted to hear about their market; and a few they probably didn’t.

In her opening remarks welcoming everyone to the event, Michael Saunders praised her agents, managers and staff for the tremendous team effort and sacrifices made that have helped the company lead the market out of nearly four years in the wilderness.

“I feel that fear has finally begun to subside and we are seeing buyers gain more confidence in the market,” she told the packed room. “No one is jubilantly happy yet, but there is a fresh air of optimism in our region; and indeed across the country. So the optimism we have always felt for this market has spread and is now being powerfully reinforced with the consumer’s optimism.” That being said, she proudly introduced the day’s guest speakers.

His reputation as a provocateur built on telling it like it is, Harney teed-off his presentation by challenging his listeners to do no less than save the world. “The world is counting on the U.S. to solve the global economic crisis,” he said. “The global economy won’t recover until the U.S. economy recovers; and that won’t happen until the U.S. housing industry turns around. And since yours was among the first U.S. markets to experience the downturn; and is now among the first to recover, you have within your skill sets the ability to help your colleagues in other markets survive the same process with greater speed and efficiently. If not you,” he challenged them, “Then who?” 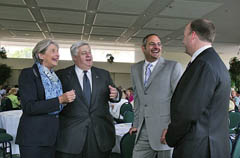 The entire room smiled confidently and heaved a huge collective sigh of relief as Harney put everyone on notice that Southwest Florida is most definitely emerging from the lengthy real estate correction that other markets—such as Houston, Texas—are just now encountering full force.

“Agents in Texas would kill to have the problems you’re dealing with at this point,” Harney said, having just addressed a similar gathering of real estate professionals in Houston. He was referring to the record number of appointments now being set to show properties listed with Michael Saunders & Company. He was also referencing the inventory of unsold homes in Sarasota County, which was down in April to its lowest point since December 2005. Obviously that has something to do with year-to-date sales (through April) being up by 21.7% and pending sales being up by 44.5% versus year-to-date last year.

With 9 out of every 10 buyers now beginning their home search on the Web, it’s rare for any one of them to contact a real estate agent much before they’ve done months of independent research. Matthew Ferrara used his time in the spotlight to challenge his audience to stop waiting for the market to improve; and instead use technology to more effectively work the market they’ve been dealt. While urging them to do something as simple as purchase a “smart” phone (one with email capabilities), he mainly encouraged them to join the conversation at various online social networking sites such as LinkedIn, Facebook and others. Each group of consumers—be they Baby Boomers, Gen X-ers or Gen Y-ers—has their own distinct culture, set of values and preferences for where, when and how to communicate. Meet them on their own terms or risk not meeting them at all.

The keynote speakers were followed in the afternoon by a series of breakout sessions designed to help the agents put Harney and Ferrara’s expert advice into practical usage in their own day-to-day businesses.