While the overall U.S. housing market skids, a number of local pricey properties changed hands in 2008

NEW ORLEANS, LA - (January 4, 2009) - Although they might have disappointed fans hungry for 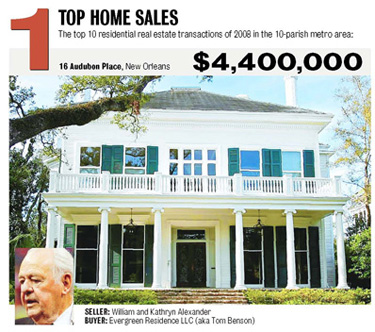 postseason bragging rights, the Saints were a source of glee last year for the local real estate community.

The team's big earners accounted for two of the region's 10 most-expensive home purchases for 2008. Owner Tom Benson topped the list of luxury deals with his $4.4 million pad on Audubon Place, and defensive end Will Smith snapped up a Kenner home from novelist Anne Rice two months after signing the largest contract in team history.

New Orleans and its distinctive architecture have always proven a draw for celebrity investors, including such astral figures as Brad Pitt and Angelina Jolie. This past year's list of luxury buyers included more local than imported talent, among them an Ochsner cardiologist, the president of a stevedoring company and political consultants James Carville and Mary Matalin. 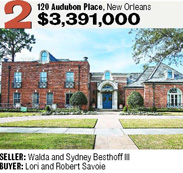 While each parish has tony enclaves and cul-de-sacs that might vie for a place in the top 10, last year's most exclusive real estate 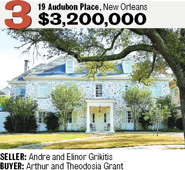 transactions took place mostly in the city proper. The gated Audubon Place community claimed two of the top slots, while the luxury condominium tower One River Place registered another. Metairie Club Gardens was notably absent from the list, as was St. Tammany Parish.

Local real estate agents like to say that New Orleans moves out of step with other cities when it comes to real estate trends. Homes prices in the metro area never lofted to unsustainable heights during the boom years, but neither did they undergo the painful correction now afflicting states like Florida, California and Nevada. Thirty-seven homes sold in greater New Orleans for more than a million dollars in 2008, compared to 27 in 2007. 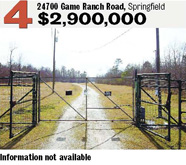 "You would think the economy had turned to jello. Not in New Orleans," said Arthur Sterbcow, president of the real estate company Latter & Blum. "There is a lot of money in this town." 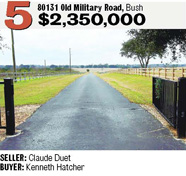 The names that occupy the top 10 are familiar to anyone who follows the society pages. The Besthoff family, founders of a drugstore chain, sold to local technology entrepreneur Bobby Savoie. The Schlesinger family sold a St. Charles Avenue condominium to oil executive Chip Goodyear. Lawrence Israel, a New Orleans native, entrepreneur and Wall Street trader, sold a condo two months before his death to David Fennelly, president of the Reserve stevedoring company Associated Terminals.

Benson occupied the top spot in the pantheon. The Saints' vice 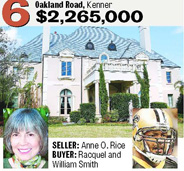 president for communications, Greg Bensel, said Benson values his privacy and was reluctant to have the price of his home published in the newspaper. He nonetheless portrayed the purchase as a signal of Benson's commitment to investing not only in a football team and television station in New Orleans, but also in a home. 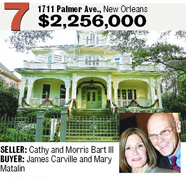 "Mr. Benson has stated numerous times that we need to invest locally in New Orleans and our region, seek new businesses and build on the ones we currently have, and he continues to do just that," Bensel said.

The Will Smith home, purchased from Rice in August, clocked in at No. 6 on the list. Carla Kelch-Porter, the Prudential Gardner agent who 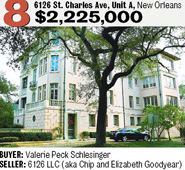 worked with the buyer, said it includes a library that holds 30,000 books, a large entertainment room, a pool and a showpiece garden in the backyard. The home, the only one in Jefferson Parish to make the list, had sat on the market for more than two years.

Rice sold it for $2.265 million, less than she paid for the property in 2004. The author used to own a home on First Street in the Garden 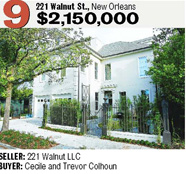 District, which she unloaded before relocating to California a few months before Hurricane Katrina. The Wall Street Journal reported last month that the First Street residence, the setting of several of her vampire novels, is once again for sale.

Stunning grounds appear to be a common feature of 2008's most exclusive homes. The house on Audubon Boulevard sold by Walda and Sydney Besthoff III -- sponsors of the sculpture garden at City Park -- sits on three lots with terraced tropical gardens. A nearby home on Walnut Street purchased by the young and newly married Trevor and CeCe Colhoun backs up to Audubon Park. Her mother owns the Mimi boutique on Magazine Street; his family is descended from the inventor of the steel plow. 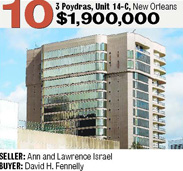 While the lion's share of the homes were in an urban setting, two were located in horse country on the north shore -- one in Springfield and a second on 98 acres in Bush. Skip Scoggin of Scoggin Properties, who worked with the buyers on the latter property, said it includes a guest house attached to a barn. The new owner, Kenneth Hatcher, plans to tear down the main house and build an environmentally friendly residence in its place.

The top 10 isn't infallible. The numbers come courtesy of the multiple listing service, which tracks only those sales brokered by real estate agents. Private sales that never involve an agent are not included. Sometimes quirks in the way sales are recorded also skew the list. For example, an agent listed two condominiums on the eighth floor of the One River Place condominiums separately, although they were sold to one buyer.

One River Place, the exclusive condo tower at the base of Poydras Street that is home to several professional athletes, recorded a number of sales this year of more than a million dollars. Only one made the top 10 list -- the unit sold to Fennelly by Ann and Lawrence Israel, whose family founded the investment firm ACLI International Commodities.

Glennda Bach, the Latter & Blum agent who worked with the buyer, said the condominium has a large kitchen and spectacular views. Situated as it is on the 14th floor, the condo offers eye-level views of the fireworks that explode on New Year's Eve. Condo owners, swaddled in luxury, have the option of room service provided by the nearby Hilton.

"The key to One River Place is the view. You have the most spectacular view of any place in the entire city. You overlook Algiers Point. There is a continuous show on the river -- a tug pushing a barge, a ship coming around the bend," Bach said. "The particular unit you're talking about has a river view and a city view."

Observers handicapping the top sales of 2009 should watch the impending sale of the former Edgar Monroe mansion at 5531 St. Charles Ave. Former state Rep. and Jefferson Parish Council Member Jennifer Sneed relinquished her seat on the Parish Council in August because she and her husband, landfill owner Fred Heebe, planned to purchase the home.

Sneed said last week that the sale is scheduled to be completed in January. The seller allowed her family to abate lead paint inside the home before taking title, and Sneed said the work is almost done.

The house has had no shortage of prominent occupants of late. The writer and New Orleans native Michael Lewis rented the place and chronicled his experience living in a house he could not truly afford for Portfolio magazine's October issue. Lewis called it the "most conspicuously grand house in New Orleans . . . the biggest mansion on the street with all the mansions."

milehimodern Announces the Sale of a Radiant Washington Park Residence for $3.25M in Denver, CO

Cathy Curley of Dale Sorensen Real Estate is Pleased to Announce the Sale of 500 Bay Drive in Vero Beach, FL For $20M