ATLANTA, GA - (October 30, 2008) – More than 300 members of the Atlanta Symphony Orchestra and their guests attended the ASO’s recent Fall Membership Party, which was co-sponsored by Beacham & Company, RealtorsThe party was held at the home of Bill and Frannie Graves on Cherokee Road in Buckhead. The theme was “A Great Pairing,” which emphasized the nature of the ASO’s work in pairing community volunteer efforts and fundraising with the ASO’s world-renowned musicians. 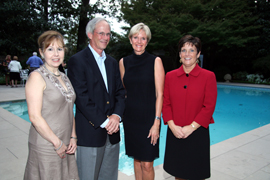 The highlight of the evening was the presentation of a check to ASO president and CEO Allison Vulgamore for more than $1 million, representing the collective funds raised by the ASO over the past year.More than a dozen representatives of Beacham & Company were in attendance at the event, including company founder Glennis Beacham who has been a patron sponsor of the ASO since 1995.Beacham & Company, REALTORS® is a boutique real estate company specializing in luxury real estate. The company was founded in 2006 by Glennis Beacham, one of Atlanta's most celebrated real estate agents over the last 15 years. The firm has the highest average sales price of any general brokerage company in metro Atlanta at $1.9 million and is the top selling office in Buckhead by dollar volume of homes sold for more than $750,000. For more information about Beacham & Company, go to beacham.com or call 404.261.6300.