LOS ANGELES, CA - While occasionally showing confidence in 2018, Los Angeles homebuyers had a difficult year grappling with rapid home price growth, continually declining inventory and higher mortgage rates. As a result, total home sales were down by 11 percent year over year in 2018. Fewer home sales were recorded across most Los Angeles communities except Malibu, which posted a 6 percent increase in sales over 2017, and South L.A., with a 1 percent increase.

The decline in activity was mostly driven by fewer sales of homes priced below $1 million, which dropped by 18 percent from the previous year. However, areas with relatively more inventory in that price range throughout the year fared better, such as South L.A. and the Eastside.

Among sales of homes priced between $1 million and $2 million, which remained on par with 2017, two areas showed particularly strong increases in sales: Mid L.A./Baldwin Hills and NELA, both up by about 70 percent from 2017. Both areas have seen high buyer demand over the last couple of years, driving the median price to above $1 million. NELA for example, saw 80 percent of homes sell for more than asking price at the end of 2017, which fueled price growth in 2018.

The growth of sales in the $2-million-to-$3-million range also posted a slight increase over 2017, up by 3 percent. And while sales growth dominated in Mid L.A./Baldwin Hills and NELA, the surge came on the heels of very low levels in 2017. The West Valley, the Southbay, West L.A., and the East Valley also saw relatively more sales of homes priced between $2 million and $3 million.

For homes priced above $3 million, a relative jump in sales appeared South of 210 and in Downtown L.A. and the East Valley, again an increase that followed very low previous levels. Figure 1 summarizes year-over-year changes in the number of home sales in 2018 compared with 2017 by price range and Los Angeles neighborhood. The last column indicates year-over-year changes in December. Los Angeles posted a 21 percent year-over-year decline in sales in December, which were widespread throughout the region, though some of the largest decreases were in areas closer to the beach and those affected by the Woolsey Fire — Malibu and Beach Communities in particular. 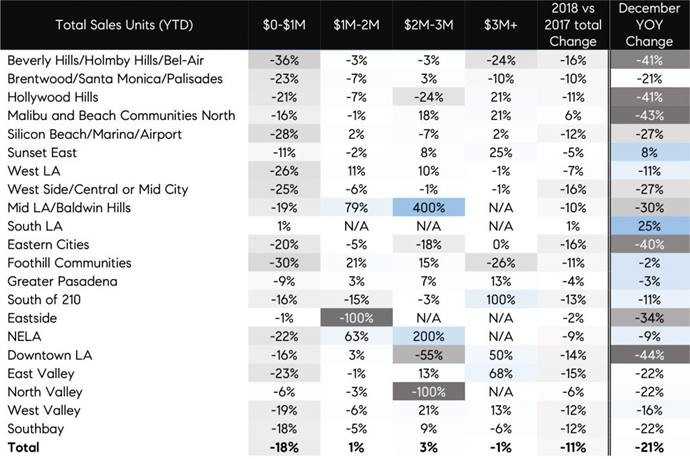 However, slower 2018 sales activity was largely driven by a 20-month trend of falling year-over-year inventory, which started around the beginning of 2017. The declining inventory trend finally reversed in the fourth quarter of 2018, when most regions started to see an increase from the year before. And at the end of the year, there was on average 8 percent more inventory compared with the fourth quarter of 2017. Nevertheless, even with the last quarter’s increase, inventory still falls below fourth-quarter levels recorded in 2016 and 2015.

A relatively larger buildup in inventory was seen in the San Gabriel Valley communities of Pasadena, Eastern Cities, South of 210, and the East Valley, along with West L.A. the West Side, and Silicon Beach. However, some communities continued to post annual declines in inventory, namely Malibu areas, a trend that may have been driven by the aforementioned wildfire. Inventory declines were also dominant in South L.A. and the Eastside, both areas perceived as more affordable and where 2018 sales activity remained relatively consistent with 2017.

Figure 2 illustrates changes in fourth-quarter year-over-year inventory by Los Angeles community and price range. While all price ranges posted more inventory, the supply of homes priced between $1 million and $2 million saw a relatively larger increase compared with the end of 2017, up by 15 percent. Only Malibu and the Hollywood Hills lacked more inventory in this price range. And for homes priced above $2 million, while increases appear larger in areas like Mid L.A., the increase comes off of a low base. The overall supply increase in the Los Angeles region was driven by more homes on the market from Beverly Hills toward western part of Los Angeles.

Most importantly, though, is to finally see more inventory for homes priced below $1 million, as the region struggles with lack of affordability. In the fourth quarter, the inventory of lower-priced homes increased by 6 percent from the fourth quarter of 2017, which translates to 251 properties. And while the relatively largest increase was in Eastern Cities, up by 44 percent; West L.A., up by 26 percent; and Brentwood, up by 20 percent, the largest contribution to the increase came from the East Valley (up by 78 homes), the Southbay, (up by 60 homes), and West L.A., (up by 52 homes).

The increase in lower-priced inventory is again a welcome reversal of trends and should help encourage some prospective buyers who have been sitting on the sidelines. 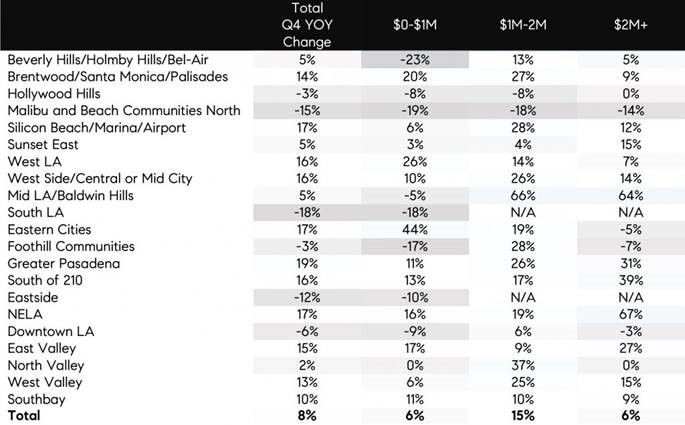 Further, the stalling housing market conditions that characterized the end of 2018 were driven by number of uncertainties, including political jitters, financial volatility, and concerns over the future of economic growth, but also by consumer perception that housing market has peaked. Consequently, buyer hesitance at the end of the year helped reset seller expectations and rebalance the relationship between the two sides. In other words, the competitive buyer spirit that characterized the first half of 2018 — when almost half of homes in Los Angeles sold over the asking price — waned in the winter. Figure 3 illustrates the three-year trend of the percent of homes that sold for more than asking price. In December, only 30 percent of homes sold for premiums, and while seasonal declines over the last three Decembers generally led to a similar rate, 2018’s decline was relatively larger — 18 percentage points, down from a 48 percent peak in May.

Figure 3: Share of Los Angeles homes that sold for premiums over the past three years

The resetting of seller expectations is also reflected in more price reductions that were seen at the end of 2018. Figure 5 illustrates the three-year trend of the percentage of homes that sold with a price reduction, which reached a multiyear high December at 33 percent. Again, the previous years’ Decembers generally posted seasonal highs that averaged around 27 percent. Figure 4 also illustrates the changes in the share of homes that sold with a price reduction between May and December by Los Angeles community. The buyer-seller rebalancing was again most notable in Foothill Communities, with a 35 percentage point increase in price reductions, from 13 percent in May to 48 percent in December.

Figure 4: Changes in the number of homes that sold for premiums and price reductions by Los Angeles community 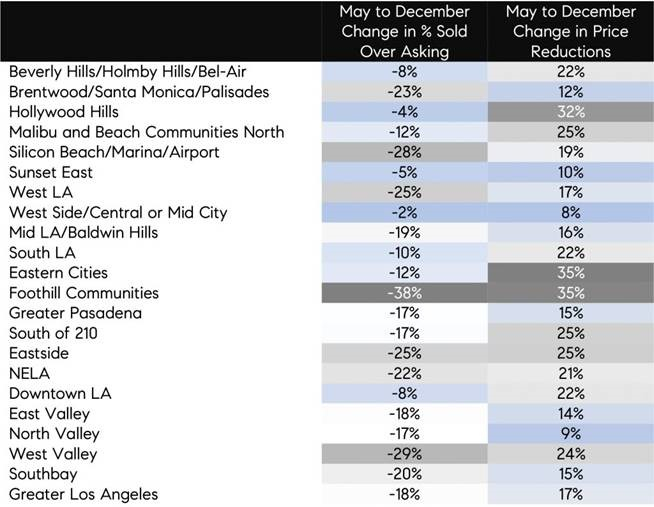 Lastly, with the market rebalancing and more inventory, pressure on home price growth slowed considerably during the winter, from the year’s high of $960,000 in June. Los Angeles’ median price, however, still increased by 8 percent overall in 2018.

Figure 6 illustrates the multiyear trend of greater Los Angeles median home prices, which ended the year at $880,000, up from $850,000 last December. Most notable is the seasonal increase in 2018, which drove up prices to $960,000. And while home prices do show a seasonal uptick during spring and summer months, 2018’s increase was relatively larger than the gains seen in the previous three years. 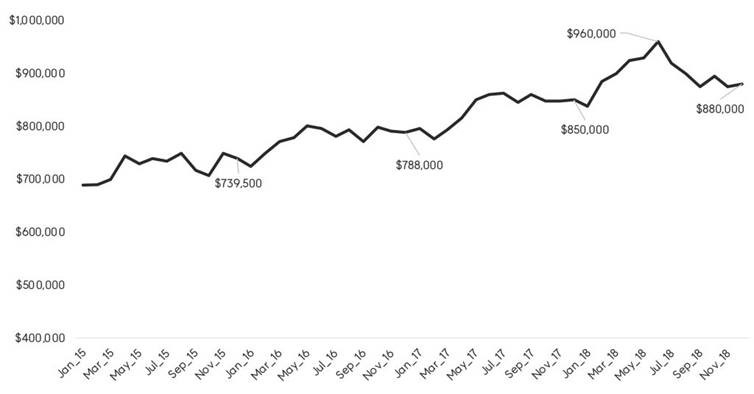 Median home price changes, as usual, varied considerably across the region. Figure 7 illustrates median home price changes in December by Los Angeles community and overall 2018 change compared with 2017. Again, while slowing after last summer, December’s median price posted a 4 percent increase over last December and an 8 percent overall gain in 2018. An area that stands out with more than a 20 percent increase in median prices are the Foothill Communities. Communities that also saw double-digit-percent appreciation in 2018 include the Eastside, South L.A., Mid L.A./Baldwin Hills, West L.A., the West Side, and Malibu. In contrast Beverly Hills and the Hollywood Hills ended 2018 with median prices on par with their 2017 levels. 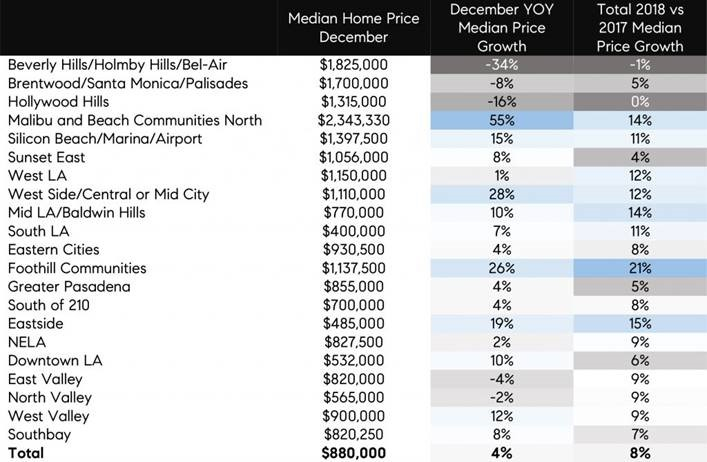 In conclusion, housing activity in Los Angeles ended 2018 with less enthusiasm than it began. There were overall fewer total sales in 2018. However, it’s important to keep in mind that inventory shortages persisted through most of the year, holding back many buyers who were looking for a home. Also, the significant price growth that dominated the early part of year was not sustainable for much longer and to a large degree turned off many prospective buyers.  Thus, the rebalancing of seller and buyer expectations was inevitable.

Nevertheless, normalizing trends are a welcome change, as is the increase in affordable inventory. Also, with the recent declines in mortgage rates and the anticipation by the Federal Reserve and its observers to see only one rate hike in 2019, Los Angeles buyers are looking at a relatively more favorable year and more certainty around mortgage rates.

Uncertainties remain though, as do questions around the government shutdown and its impact on housing and the overall economy. In California, the federal government employs 245,400 people, representing 1.4 percent of employed residents. And while that is a smaller share than in some other parts of the country, it is still an important part of the economy and represents a significant number of prospective Golden State homebuyers.