ATLANTA, GA - Through the first four months of 2018, Beacham & Company, REALTORS® was where it has been for the last 11 years when it comes to luxury real estate – tops in Atlanta. The firm outsold all other Atlanta offices in homes priced $1 million or more according to Trendgraphix, an independent provider of MLS market share data to the residential real estate brokerage industry (see accompanying chart).

In addition to its top seller status, Beacham’s market share grew faster (+33%) than any other office in the top 10 in sales. For the entire MLS, the number of $1 million-plus homes sold in 2018 was up 13.5% compared to the first four months of 2017. The $1 million and up market did better than Atlanta’s overall housing market, which was up just 1% for the same period. 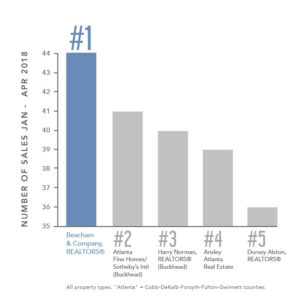 Home prices in the luxury market were a different story. The average sales price for $1 million-plus homes was down 2% from 2017 to $1,464,192.  The downward trend in prices continued a pattern that began several years ago. Unlike the market for homes priced less than $1 million which has very low inventory, the number of homes on the market priced $1 million or more is near record high levels and significant amounts of “shadow inventory,” or unlisted, expired or withdrawn listings exist.

Age demographics continued to weigh on the luxury market in 2018 as the increase in Atlanta’s population failed to boost the buyer pool for luxury homes that Atlanta Baby Boomers want to sell. The luxury market is an “off-the-top market,” where new listings either sell quickly or linger due to a property’s condition relative to new and renovated homes with contemporary finishes. Also, Gen X and Millennial buyers value different property features in general than Baby Boomers.

Read more about the luxury market in the upcoming issue of The Beacham Insider later this month.

Beacham & Company, REALTORS® is Atlanta’s top-selling luxury real estate office. The firm was founded by Glennis Beacham, one of Atlanta’s most celebrated real estate agents and the only agent in Georgia to sell nearly $2 billion in real estate. The firm has 100 agents who average $7 million in sales per agent, more than any other Atlanta real estate firm. In 2017, the firm achieved record sales for the 11th consecutive year and remained the top-selling office in the city for single family listings sold for more than $1 million. The firm also donated nearly $1,000 per agent to local charities over the course of the year.