ATLANTA, GA - Beacham & Company got 2018 started in record-breaking fashion with a record number of homes sold in January. Closings at the firm were up 36% from the previous all-time January high and closed dollar volume was 28% higher than a year ago. The month of February appeared to have even more prolific increases in store based on pending sales.

The firm got an early jump on the 2018 market due to a surge in digitally-driven consumer traffic. Website visitors to the Beacham website hit an all-time record in 2017 and were up 29% in January, reflecting both the firm’s late 2017 marketing efforts and the annual January surge in home buyer activity on the internet. The firm also benefitted from its re-vamped app which debuted at the end of 2017. The app generated record interest in Beacham listings over the last 45 days and enhanced consumer affinity efforts that reached more qualified buyers than ever interested in Beacham listings. 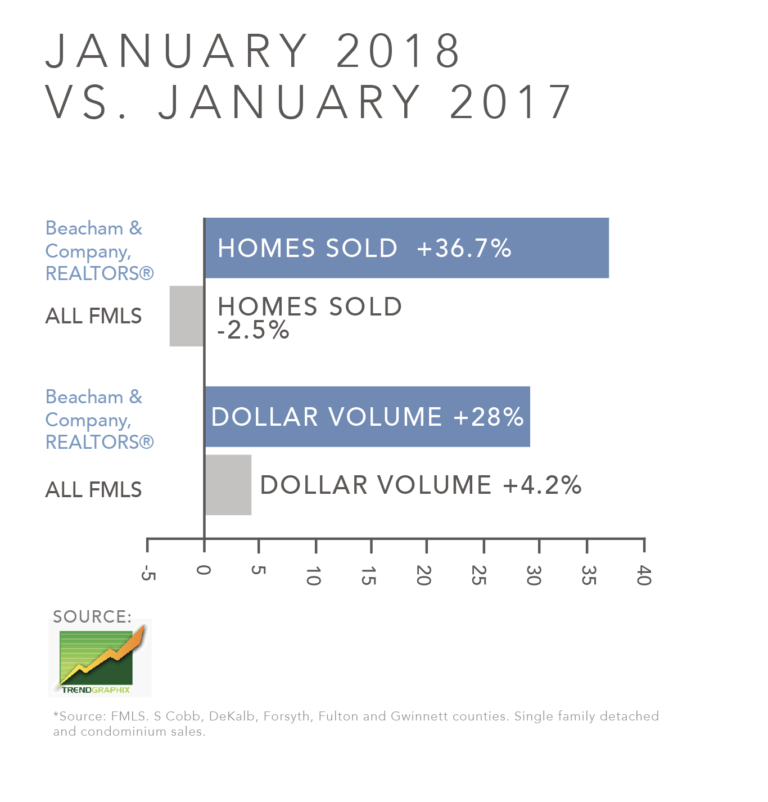 Beacham & Company’s good fortune contrasted with the overall Atlanta real estate market which experienced a dip in January from January a year ago. Sales of both single family detached and attached homes in the five-county metro dropped 2.5% in January, although when evaluated separately, attached home sales actually increased 7.4%. Areas where sales were especially strong in January included Buckhead and Sandy Springs.

The January results reflected the continuation of a sluggish trend that characterized the market as a whole in the last six months of 2017. Lack of inventory continued to hamper the market in January even as nearly 2,000 unsold listings expired on Jan. 1 – many without returning to the market. The large number of failed MLS listings amidst unabated demand perhaps best illustrated the unusual real estate market conditions.

Beacham & Company, REALTORS is Atlanta’s top-selling luxury real estate office. The firm was founded by Glennis Beacham, one of Atlanta’s most celebrated real estate agents and the only agent in Georgia to sell nearly $2 billion in real estate. The firm has 100 agents who average $7 million in sales per agent, more than any other Atlanta real estate firm. In 2017, the firm achieved record sales for the 11th consecutive year and remained the top selling office of single family listings sold for more than $1 million.