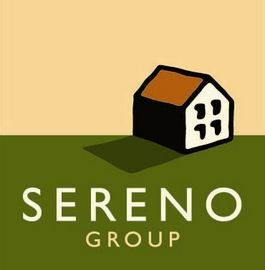 LOS GATOS, CA - Sereno Group and its Los Gatos agents contributed 1% of their gross commissions to support Walk to End Alzheimer’s during the months of January through March 2017. Through 1% for Good campaign efforts, a check for $20,000 was presented to The Alzheimer’s Organization.

Alzheimer’s Disease is the fifth-leading cause of death in California, and the only cause of death among the top 10 in the United States that cannot be prevented, cured or even slowed. The Alzheimer’s Association is the leading voluntary health organization in Alzheimer’s care, support and research. Every dollar raised through Walk to End Alzheimer’s will help make a difference in the lives of millions of Americans facing the disease today - including the more than 610,000 Californians with Alzheimer’s and their over 1.5 million caregivers - while advancing research towards prevention, treatment and ultimately, a cure.

Launched in 2012, the 1% for Good program is an office specific, agent driven, grassroots movement that donates to local non-profit, community-minded organizations. Sereno Group was honored as one of the top 50 philanthropic corporate organizations in Santa Clara County for 2016 by the Silicon Valley Business Journal. Sereno Group was recognized as a result of the efforts from its 1% for Good movement. 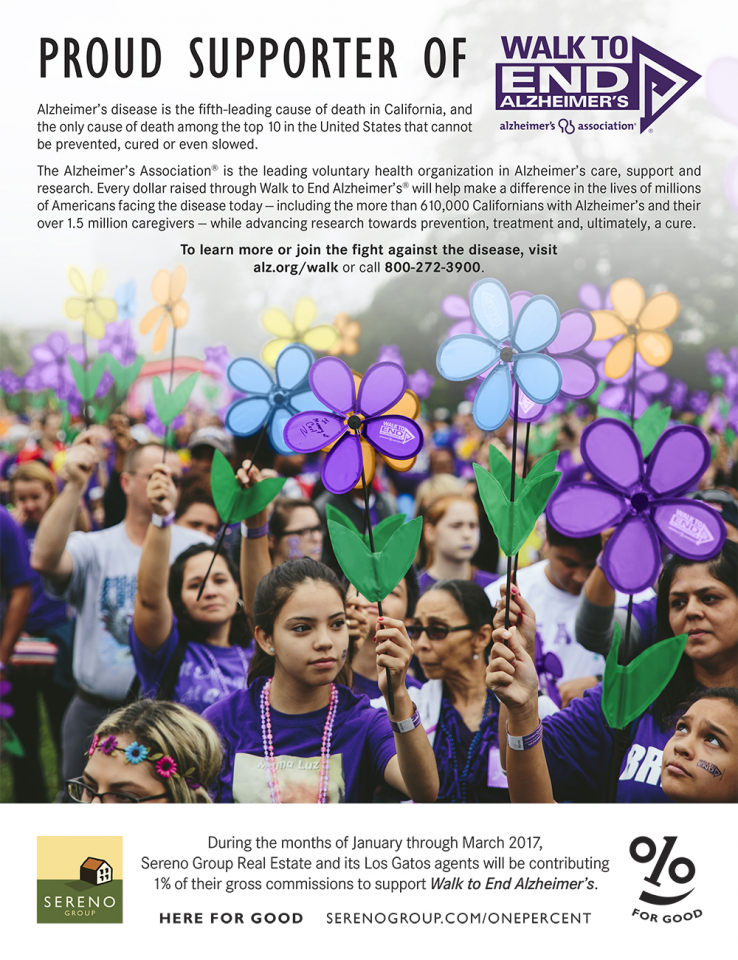 “This recognition validates all of the great work our Realtors perform in the community and their collective generosity. It is also incredibly humbling to be honored by the Silicon Valley Business Journal once again for our charitable work,” said Chris Trapani, Founder and CEO of Sereno Group. “The 1% for Good movement is part of the ethos of Sereno Group and its agents which focuses on the community first. It is tremendously inspiring that our relatively smaller company with 330 Realtors would be sharing honors of giving alongside great organizations such as the San Jose Sharks, the Sobrato Organization, and Adobe.”

For more information about 1% for Good, please visit: www.serenogroup.com/onepercent.

Open since July 1, 2006, Sereno Group Real Estate has quickly established itself as a market leader by continually attracting top producing agents in the Silicon Valley. During this time, Sereno Group has achieved the highest per agent productivity for residential real estate brokers in the counties it serves. In 2014, Sereno Group closed over $2.4 billion in sales with an average sales price of $1.1 million. The company’s 1% for Good charitable movement donated over $400,000 to local charities and community-minded organizations and Sereno Group was recognized as one of the top 50 most philanthropic corporations in the Bay Area. The company, which has been ranked the #1 Best Place to Work in the Bay Area for six years, now has eight offices located in Palo Alto, Los Altos, Saratoga, Los Gatos, Willow Glen, Santa Cruz, Westside Santa Cruz, and Aptos. The 350 agents of Sereno Group serve the Santa Clara, San Mateo and Santa Cruz Counties and points beyond. For more information, please visit: www.serenogroup.com