CHICAGO, IL - Nancy Nagy, CEO, and Michael Pierson, President, of Berkshire Hathaway HomeServices KoenigRubloff Realty Group, attended the Berkshire Hathaway HomeServices National Convention in Phoenix, Arizona this week where, on behalf of their agents, they accepted the award as the #3 BHHS brokerage in the nation, known as the Berkshire Elite Circle. KoenigRubloff was also honored as the #1 brokerage in the Midwest Region.

In additional office awards, the Lincoln Park Clybourn office, located at 1800 N. Clybourn Avenue in Chicago, IL, was named among the Top 10 Berkshire Hathaway HomeServices offices in the country for both closed residential units and total gross commission income (GCI). The office was also recognized for residential units and total GCI in the Round Table category which is awarded to the top three offices in the network by region and size. Managing Broker Darlene Little accepted these awards on behalf of her agents. 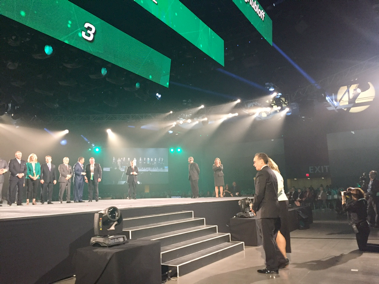 Also in the Round Table category, Managing Broker Jeani Jernstedt accepted the award for Total GCI for the Gold Coast office which is located at 900 N. Michigan Avenue in Chicago, IL, and Managing Broker Michael Mazzei accepted a Total GCI award on behalf of the Webster office which is located at 1214 W. Webster Avenue in Chicago, IL.

The MG Group of the Lincoln Park Clybourn office received awards in multiple categories including the #10 team in the entire network for GCI, and the Top 100 Units and GCI.

Jennifer Mills Klatt of the Home Discovery Team in the Webster office, and The Pattie Murray Team, of the Glen Ellyn office, received the Top 100 Units and GCI award.

Ivona Kutermankiewicz, of the Lincoln Park Clybourn office; The Klopas Stratton Team, of the Gold Coast office; The Jerfita Team, of the Glenview office; and The Brad Lippitz Group, of the Broadway office, received the Top 100 GCI award.

Colette Connelly, Michael Giliano, and Cara Buffa of the Lincoln Park Clark office, Elaine Pagels, Kris Berger, and Diana and Chuck Ivas of the Hinsdale office, and Janet Owen of the Mag Mile office received the 5-year Legend award for attaining  for five consecutive years receiving the Chairman’s Circle Award. The Chairman’s Circle Award is bestowed upon agents who have consistently ranked in the top two percent of sales professionals in the national network.

“It is a great honor to represent our agents at the national BHHS convention,” said Nagy. She continued, “I’m so proud to be associated with such amazing professionals who provide outstanding service to their clients and are such an asset to their communities and our profession.”

Pierson added, “I’m so proud of our agents and the outstanding work they do each and every day on behalf of their clients. For them to receive recognition on the national level for their hard work is really gratifying.”