AUSTIN, TX - Leading luxury real estate marketplace Concierge Auctions is pleased to announce the expansion of its marketing and technology headquarters in Austin, Texas. The new office — located at 800 Brazos in Downtown Austin — will support the firm’s plans to enhance its in-house talent pool and rollout a number of cutting edge marketing, software and data-driven initiatives.

“This is an important move, as we now have a custom-designed environment to support and inspire our team as our business continues to scale,” said Concierge Auctions Founder and President Laura Brady. “We will soon surpass $1 billion in sales, and while we already service 27 US states and six countries, we are poised to double our annual productivity in 2016. We’re ecstatic about our future and look forward to many more rollouts to enhance our growth in the months and years ahead.”

At over 9,000 square feet, the new office is over three times the size of its prior space at 1308 East 7th Street and allows for up to 75 employees. The company worked with Todd Gilfillan and Michael Bullard of CBRE to secure the new space, which was previously occupied by Mass Relevance before it merged with Spredfast in 2014. 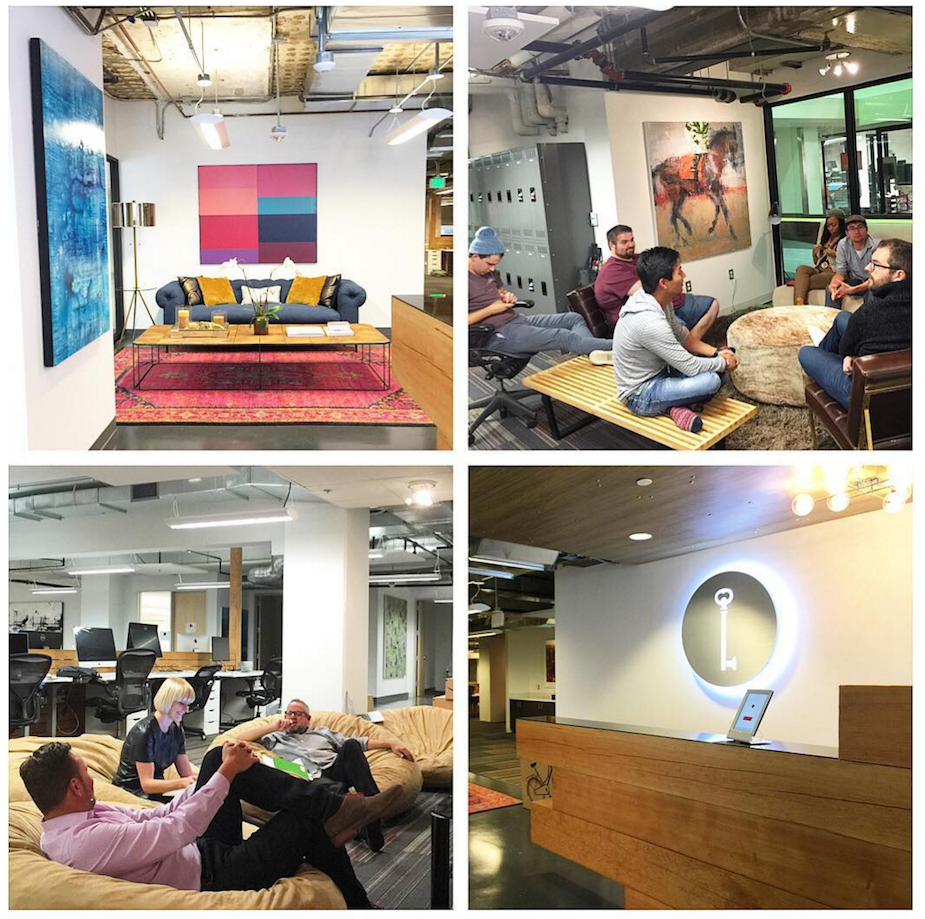 The new facility was designed not only for productivity but also for casual collaboration and fun. Employees enjoy an open concept work environment with sit-to-stand desks, while four conference rooms and four “hotel” offices allow for private group meetings or individual retreat — each aptly named after one of the company’s many record-breaking property sales. For casual discussions and camaraderie, employees can relax in one of the “living room” vignettes, complete with sofas and comfortable seating; the beanbag area, with four oversized beanbag chairs; or the bistro adjacent to the kitchen. Work breaks call for friendly competition on the Ping-Pong table or jumping on the company’s shared bikes and cruising through Downtown Austin.

Concierge is also the largest corporate account in Austin to offer the innovative, San Francisco-based Luxe on demand parking service to every employee in its office. Through Luxe’s sophisticated technology platform, employees have valet pick-up and drop-off at their fingertips.

“Austin has emerged as a national hub for creativity and technology, especially as it relates to growing, innovative companies. Our expansion to Austin paid immediate dividends, allowing us to draw from a deep pool of top tier software and marketing professionals,” said Concierge Auctions Chairman Chad Roffers. “We started 2015 with 15 full-time employees in Austin and will end the year with 34. We look forward to continuing to attract the best and brightest minds to help meet the growing demand for our platform.”

In addition to moving offices, Concierge Auctions also soared up Inc. Magazine’s list of America’s fastest growing companies for the second year in a row, and USA Today and the National Auctioneers Association recognized the firm as “Best in Show” for Advertising and Public Relations.

New York-based Concierge Auctions is the dominant marketplace for buying and selling the world’s finest properties. Since its founding in 2008, Concierge’s business has spanned 27 US states and 5 countries, resulting in over $900 million in sales and many record-setting transactions. Concierge recently received the "Best Overall Marketing" award from Who's Who in Luxury Real Estate, a global collection of more than 130,000 real estate professionals in more than 60 countries, and has been named one of America's fastest-growing companies by Inc. Magazine for the past two years.

6 Ways You Win by Working with a Real Estate Agent