CHARLESTON, SC – Debbie Peretsman and Mary Lou Wertz, both of Handsome Properties, recently reported the sale of 10 King Street, listed at $4.4 million. Mary Lou served as the listing agent and Debbie Peretsman assisted her clients in purchasing the home. This Federal/Adam style home, built circa 1791, is a beautiful Charleston single style home located on an iconic stretch of famed King Street, in the heart of the desirable “South of Broad” neighborhood in Charleston, South Carolina. 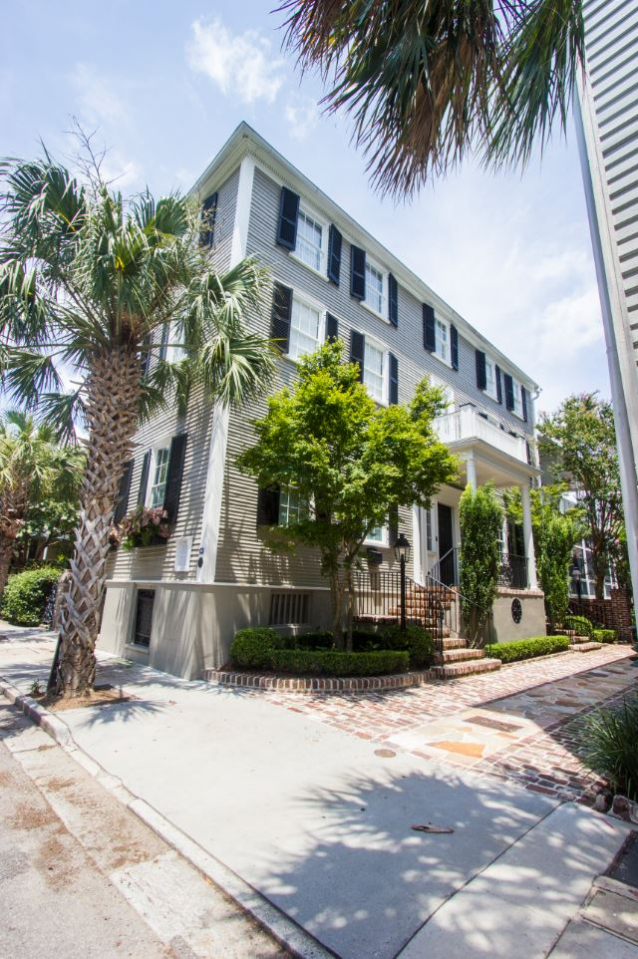 The home is approximately 5,950 square feet and consists of five bedrooms, five full and one half bathrooms, and has been well maintained and restored with original architectural details remaining intact. The grand and spacious formal living and dining rooms boast incredible fireplace mantels and moldings, as well as heart pine floors. A more casual family room offers another fireplace and built-in bookshelves. Completing the first floor is a renovated kitchen with a unique exposed brick fireplace and separate breakfast room. The heart pine floors continue upstairs into the four over-sized bedrooms, which also feature recessed lighting and a sitting area in the master suite. Screened-in piazzas overlook the handsomely landscaped garden, designed by renowned Charleston landscape artist, Loutrel Briggs. A charming old stable and English brick wall are also featured in the garden. This exceptional home is located just a short walk from The Battery and White Point Gardens, focal points of the Charleston Peninsula.

The South of Broad neighborhood is one of the oldest in Charleston, dating back to the 1700’s when the main east-west thoroughfare in Charleston was Broad Way. This neighborhood also includes part of the Old Walled City of Charleston. Prominent citizens built spectacular mansions with meticulously landscaped gardens, intricate iron gates, and spectacular views of the Ashley and Cooper Rivers. Today, South of Broad contains some of the most sought-after luxury real estate in the Lowcountry. These timeless, historic Charleston homes are nestled in a quiet neighborhood and reflect Charleston’s history as the South’s wealthiest port of the 1800’s. Fine dining on East Bay and shopping on King Street are a short stroll or cycle away.

For the past 20 years, selling agent Debbie Peretsman has owned property throughout the greater Charleston area, including both historic downtown and the nearby coastal communities. Having lived all over the country including New York, Boston, Los Angeles, San Antonio and Charlotte, she has always considered Charleston her home and her favorite place to live. During her first year as a realtor, Debbie quickly established herself as an exceptional agent in the Charleston downtown luxury market by selling some of Charleston’s finest historic luxury properties. In her first year, she received the “Rookie of the Year” award and the “Realtor of Distinction” award for outstanding sales performance. Debbie’s appreciation and passion for Charleston, along with her knowledge of the area, her understanding of value and a keen sense of style, has helped contribute to her success as a realtor.

Listing agent Mary Lou Wertz joined Handsome Properties after being involved in many real estate ventures both domestically and abroad. She is a native New Yorker who started out with a BS in Accounting from Villanova University. After a few years at Deloitte, Haskins and Sells, Saloman Brothers and Teeman Kinary, Mary Lou left the corporate world to raise her three children while her husband worked outside the home, which eventually took them to London, England. While living abroad, she continued to rent, buy, renovate, and sell houses while enjoying the benefits of foreign living and travel. This time solidified Mary Lou’s love for architecture, history, fine food, and culture. When Mary Lou and David decided to repatriate, Charleston was the obvious choice. They discovered the city 17 years ago as a vacation destination and decided to move here permanently.

Handsome Properties invites you to view their current listings for your client looking to purchase their luxury property in Historic Charleston, South Carolina. Contact Debbie or Mary Lou with any questions you may have regarding property throughout the Charleston area; they can be reached by phone at 843-727-6460 or via email at DebbieP@handsomeproperties.com or Marylou@handsomeproperties.com.