Sereno Group was originally recognized in 2010 in the lists small company (50-150 employees) category and has received the recognition in the medium sized companies (151-500 employees) for the past two years. The firm has been ranked either first or second in each category for each of the past five years.

Of special note, Sereno Group is one of only seven companies to be named to the list every year since the awards inception in 2010. More than 6,400 companies have been nominated since 2010 and the final list of 100 companies is comprised of a diverse cross section of firms which include high tech and engineering organizations, nonprofits, hotel services, and legal firms, among others.

“We are so pleased and humbled to be recognized again as one of the Top Workplaces in the Bay Area,” said Chris Trapani, Founder of Sereno Group, “This award is a testament to our team’s spirit and the company they have created and nurtured since 2006 when we opened. And to be recognized for every year since the award’s inception is truly appreciated by all of us.”

The Bay Area News Group compiles the rankings annually. The Top Workplaces 2014 list is based solely upon a comprehensive survey of Bay Area company employees and their overall satisfaction with their respective companies. 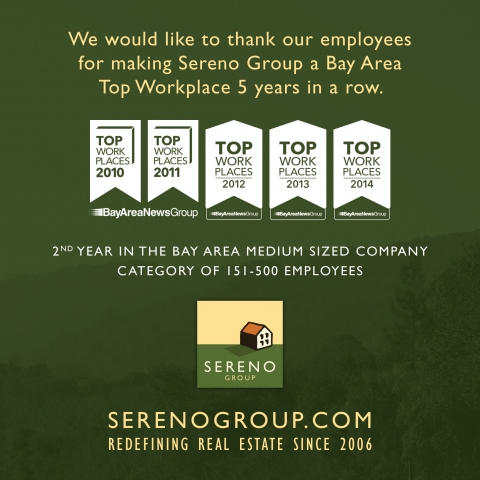