“I’ve known Rob now for about a decade, and he is probably one of the best salespeople I’ve met – and I know a lot of great sales­people,” says Sorensen, who’s been in the real estate industry for 20 years. “I can’t say that I’m surprised to hear he’s made that list of top agents in the U.S. because I’m well aware of how strong of an agent, manager and person he is.” 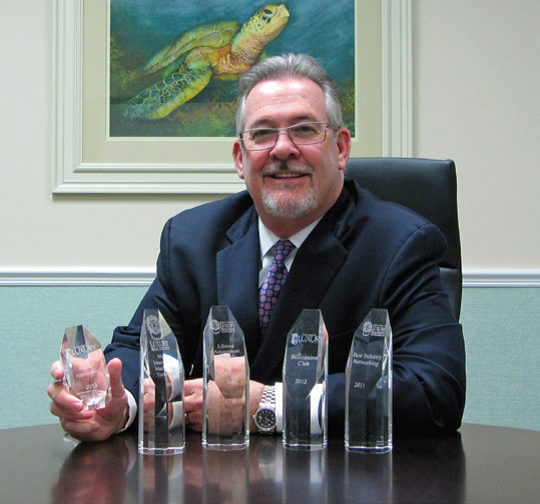 Last year alone, Thomson closed on $136,108,540, enough to earn him a spot in the Wall Street Journal’s list of the nation’s top real estate professionals. For Sorensen, who considers Thomson a friend as well as a mentor, it’s a ranking Thomson has deservingly earned.

Waterfront Properties, known for its unrivaled luxury real estate service and specialized team of associates in the Palm Beaches and Treasure Coast, has long been recognized for its real estate excellence and marketing prowess. With the ability to connect buyers and sellers from Jupiter to Japan through its state-of-the-art online presence and Internet presence, Waterfront Properties has become one of the nation’s most respected real estate firms. And, there’s no doubt much of that success is owed to Rob Thom­son’s leadership in the market.

Even an individual like Sorensen, whose family is one of the top real estate organizations in the state since its founding in 1978, learning from Thomson has been invaluable.

“I think the one thing that differentiates Rob from others is his willingness to constantly change to get better. He’s constantly learning,” Sorensen stresses. “For someone who is No. 38 in the nation, it’s humbling to see that he is still constantly learning. He’s been instrumental, not only to his own sales team, but also sharing information with me. From a business perspective, I don’t know anyone who would share so much information so freely.”

Sorensen says much of his own company’s success is due to Thomson. From Sorensen’s 100-member team to his company closing $430 million in the past 12 months, much of that growth and success Sorensen attributes to learning under Thomson.

“One of the best pieces of advice he’s ever given me I carry with to this day,” Sorensen says. “Rob and I always compare marketing pieces and messages, and one area he has helped me on several occasions is steering me away from reacting. As the market leader in our area, other companies often take shots at us through various marketing channels, and the temptation is to respond and react. Rob has always coached me and often corrected my messaging to never be reactive, to just highlight what we do, our results, our features, and our benefits, and never to react to the competition, and always take the high road. This is one of the most important lessons I have learned from Rob, and as a result we aggressively market our brand, and we do three times the sales of our closest competitor.”

Sorensen isn’t the only one who has benefited from Thomson’s mentor-like role. Several members of the prestigious Who’s Who in Luxury Real Estate, an invitation-only organization of the na­tion’s top realtors, have also gained first-hand knowledge that has bettered their business. Meghan Barry, the president of Who’s Who in Luxury Real Estate, says Thomson’s willingness to invest in and mentor other agents has led to indispensable relationships with top agents around the globe.