San Francisco, California | January 11, 2012 - The continual growth of Vanguard Properties, the well-known San Francisco Real Estate firm headed up by Principal James Nunemacher, for almost 30 years has never been more evident. Today the firm announced the opening of a downtown location to focus on the sales and re-sales of so many downtown, SOMA and Mission Bay condominiums in addition to the firm’s own projects slated for sale in 2012.

The office is located at 199 New Montgomery, at the corner of Howard Street, in what was formerly the offices of Engler & Volkers chain of offices. It’s rumored that this will be the second point of the Vanguard city triangle with its next location to be in the Pacific Heights area of San Francisco. 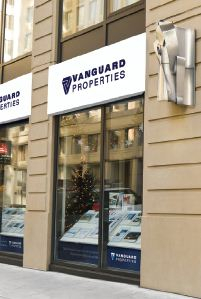 The 2011 year end numbers for Vanguard Properties posted close to a 30% gain in sales over 2010. Some of which was attributed to Paula Gold Nocella’s hiring of over 25 Real Estate agents and Broker Associates from other agencies in San Francisco looking for a new fresh approach to jump start or re-start their Real Estate careers. Ms. Nocella, the former partner of Mason McDuffie Sonoma Gold Better Homes and Garden Realty Healdsburg office and President of Sonoma Gold Corporation, has been with Vanguard for one year. “We are thrilled at this past year’s gain in what’s been touted as a down national Real Estate market,” said Ms Nocella.

Vanguard Properties is confident with the influx of new businesses and work forces in San Francisco that the growth will keep steady. Accompanied by the fact that many Real Estate agents are interested in what Vanguard has to offer in marketing versus their competitors. “Our company takes a different approach to marketing Real Estate and supporting our agents. We work as a team to assist our agents and clients to achieve success,” said Principal James Nunemacher.