The landmark eatery was sold to Larry Silverstein, a real estate developer from Baltimore, Maryland who specializes in historic buildings. Silverstein formed a partnership with local restauranteur, Patrick Kilroy and plans on restoring the building and continuing to operate a restaurant. 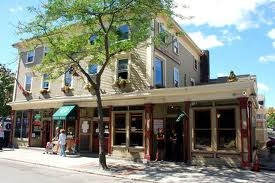 Francisco and Maria Salas opened the business in 1952, originally operating it as a bar. They began the restaurant operation in 1963. During the America’s Cup Race years it was a favorite stomping ground for Ted Turner and Baron Bruno Bich, and was also visited by Walter Cronkite, Billy Joel, Kelsey Grammer and Matthew Modine, to name a few.

Rick Salas, one of the sons of the founders said that his brothers Frank and Jose who had run the restaurant up until last month, expressed an interest in selling the business to pursue other interests. “The Salas brothers couldn’t have found a better fit,” commented Aguon.

Gustave White Sotheby’s International Realty is a full-service agency specializing in waterfront and water view real estate and serving all of Rhode Island as well as southeast Connecticut and coastal Massachusetts. Gustave White has been in business for over 78 years as a leader in the luxury market, is the sole Sotheby’s affiliate for Rhode Island, and the Rhode Island Regent member of Who’s Who in Luxury Real Estate. Paul A. Leys, Co-owner of Gustave White Sotheby’s Int’l Realty, may be reached at 401-848-6706 or at pleys@gustavewhite.com for more information.

The Opportunity To Be Globally Connected