Managing broker Steve Blank (right), heads up the new, 1,500-square-foot office in the Writer Square retail center, on the 16th Street Mall. It has 10 agents.

The Cherry Creek mall location is a “marketing area” on the concourse outside Saks Fifth Avenue’s first-floor entrance, where 25 to 30 agents will alternate staffing. Fuller Sotheby’s has a full-service office at 3033 E. First Ave., in the Cherry Creek North retail district across from the mall.

“A real estate firm is only as good as the exposure it can generate. … You have to be more proactive, strategic and high-energy today,” Scott Webber (left), Fuller Sotheby’s president, said of the new locations. “This is taking it to the streets, being in the place to capture people’s attention and interest.” 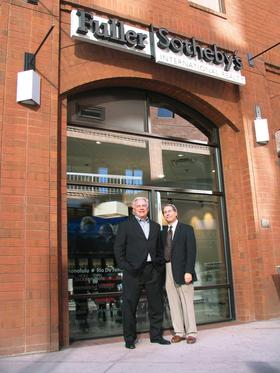 The real estate firm hopes to attract more foot traffic, especially, to its new locations. It expects visitors to include U.S. and international tourists in Colorado, as well as mountain homeowners from Vail or Telluride looking for second homes in metro Denver and vice versa.

“We’re already getting walk-ins,” Blank said of the Writer Square office, which has been open only a few weeks.

Fuller Sotheby’s sells all types of homes — current listings are priced at less than $100,000 to $1 million-plus — but its focus remains luxury homes.

Metro Denver’s Multiple Listing Service, which provides listings of for-sale homes, recently showed 109 listings with asking prices of $1 million and more, according to Fuller Sotheby’s. “And 48 of those are listed by us,” Blank said of his company.

One of the Writer Square office’s listings, for example, is a 6,500-square-foot home in Golden with four bedrooms and seven bathrooms — and a $1.85 million price tag.

Besides marketing homes at its new locations, the brokerage firm helps clients get a mortgage loan or find a moving company.

Part of Fuller Sotheby’s strategy at its Writer Square office is to make it part of the downtown community, offering the space to civic and charitable groups for small events and parties. The office even has a wine refrigerator in the kitchen for that purpose.

The new Writer Square office is a homecoming for the company as well. When Fuller Sotheby’s was Fuller Town & Country Properties, it had a Writer Square

office near the Cafe Colore restaurant on the 15th Street side of the retail center. Fuller became affiliated with Sotheby’s International Realty in 2008.

Sotheby’s is a subsidiary of Realogy Corp. of Parsippany, N.J., a provider of real estate services through brands such as Century 21, Coldwell Banker, Better Homes and Gardens Real Estate and ERA. Realogy is owned by affiliates of private equity investor Apollo Management LP of New York, which formerly was majority owner of Colorado ski-area owner Vail Resorts Inc. (NYSE: MTN) in Broomfield.

Sotheby’s International Realty also is affiliated with the famous Sotheby’s Auction House, founded in London in 1744 and now based in New York.

Fuller Sotheby’s thinks its new retail-oriented locations fit well with the Sotheby’s brand, which lends itself to a retail setting, according to Webber.

“It’s never been harder to sell a home today,” Webber said. “The pool of buyers has never been more shallow. So, you need to go to greater lengths to find the buyer.”