DENVER – Jennifer Dechtman, a top-producing broker associate with The Kentwood Company in the Denver Tech Center, has been honored with the 2009-2010 Charlotte Tucker Young Leadership Award 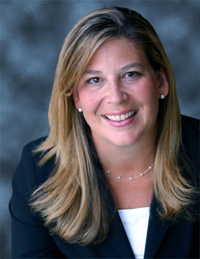 from the Allied Jewish Federation of Colorado. The award recognizes Dechtman’s commitment to volunteer work for the community and for her philanthropy. The award, presented September 14, 2009 during the Federation’s 2009 annual meeting held at the Shwayder Theater at the Mizel Arts & Culture Center, is given to a woman between the ages of 25 and 40 who has met certain outstanding leadership criteria.

“On behalf of The Kentwood Companies, our managers and broker associates, I would like to congratulate Jennifer on this outstanding award,” said Peter Niederman, chief operating officer of The Kentwood Companies. “Jennifer has accomplished many things throughout her distinguished career and has always given back to the communities and citizens she serves. It is a prestigious award and Jennifer is certainly a very deserving recipient.”

Dechtman currently serves the Allied Jewish Federation as the National Young Leadership UJC Washington liaison, lobbying for important legislation such as the Early Act Breast Cancer Bill. As the Young Leadership award recipient, she will represent Colorado at the UJC general assembly in Washington DC on November 9th where she will attend a lunch honoring other award recipients from throughout the country. Dechtman has served for several years on the Federation’s Women’s Center Philanthropy Board and works as one of the select young leaders in the country on the National Young Leadership Cabinet. She has co-chaired the Federation’s 1000 women fundraiser called CHOICES, in addition to several other fundraising events.

Dechtman earned her real estate license in 2004 and is a member of the Denver Board of Realtors (DBA). A former attorney, she was elected second vice president of the Denver Bar Association and has served on the DBA’s board of directors. While still practicing law, Dechtman was an Assistant Attorney General for the State of Colorado and argued cases in State and Federal trial courts. She and her mother, Bobbi Lou Miller, were recognized by the DBA as one of Denver’s top 10 producing real estate teams for 2008.

For more information on real estate services from Jennifer Dechtman, phone 303-669-8889 or contact Jennifer via email at Jennifer@denverrealestate.com.

The Kentwood Companies are dedicated to its legacy of being “Colorado’s Premier Real Estate Company” through the highest producing, most knowledgeable, caring and experienced sales team in the country, offering the highest quality customer service experience. The Kentwood Companies are innovators known for unparalleled marketing strategies and superior Internet technology that places its clients in the best possible position.