The nationwide plunge in luxury home sales did not exempt Newport, R.I., but vacation-home seekers are beginning to come out of hiding in the seaside community.

"The market went silent in October," says Melanie Delman of Lila Delman Real Estate. "But since April, we've experienced a change. We're busy every day with showings, discussions and negotiations."

Delman, whose company sells many of the multimillion-dollar homes in the area, believes the luxury market may finally be emerging from a lengthy drought.

Jamestown, a high-end second-home community in Newport County, has seen a 66% drop in single-family home sales from a year ago, according to the Rhode Island Multiple Listing Service.

Realtor Chad Kritzas, who specializes in selling moderate homes in Newport, says he has experienced the normal cyclical market and is coming off a great spring. "Things will slow down a little bit until school starts in August, but we will pick right back up again in September," he says.

It seems the luxury market, not the median market, has absorbed the brunt of the recession. The low sales are a clear reflection of a writhing Wall Street, says Bellevue Realtors President Vincent Marcello.

"The luxury buyers are not here in the numbers they used to be," Marcello says. "Most lost money or are afraid of losing money."

Delman does not look at sales numbers too closely, though, as her company does not operate in a "volume market." She views now as a perfect time to buy; it could be years before Newport sees a return to the caliber of homes currently on the market at such reduced prices, she says.

Lined with plush mansions along a quaint, waterfront setting, Newport County appeals to many a luxury house hunter.

Linda Purdy, a retiree from Hobe Sound, Fla., recently chose to buy a vacation home in Newport over popular Northeastern equivalents such as Nantucket and the Hamptons.

"After some serious scrutiny of Northeastern seaside towns, we settled on Newport for its easy access, Gilded Age history, culture and its great value relative to other waterfront communities," Purdy said.

Craig and Michele Millard are selling their gated Hopedene estate, which sits on a scenic coastline in the Cliff Walk neighborhood in the city of Newport. 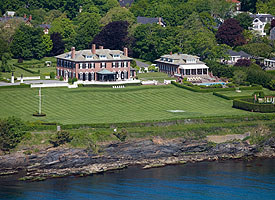 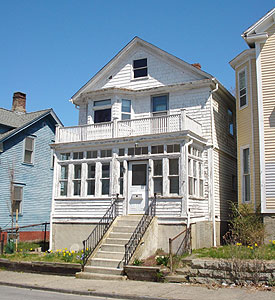 This classic Victorian home, built around 1900, is on the market.