Rimontg&oacute;. 50 Years of Service and Excellence.

Rimontgó was founded in Jávea in 1959, but the commercial tradition of the family dates back to 1890, when Mateo Ribes Simó, great grandfather of the Ribes brothers, began a thriving business exporting 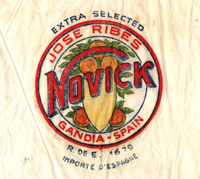 fruit to different parts of Europe. His determination and business ethics formed the underpinnings of a family tradition that is now in its fourth generation.

The addition of his son José Ribes Bas helped the expansion of the production and warehousing capacity that the firm had in the fishing quarters of Aduanas del Mar. It was perhaps this fishing tradition that inspired José Ribes to successfully diversify his business when Spain’s borders with the rest of Europe were effectively closed after the civil war.

In 1941 José and his firstborn son José Ribes Buigues built a new warehouse for tuna fishing, curing works and later sale in the market (Almadraba). In 1948 they developed the emblematic ‘Novick‘ and ‘Dogma‘ brands of orange international distribution. The fishing operation, however, ceased in 1953 after a series of strong sea storms.

When in the 50’s the astute father and son team realised that the country’s nascent tourism industry was a future giant, they started their first real estate transactions, involving mostly land. The first deals were closed in 1956, 57 and 58 with the purchase, development and sale of plots. The demand for homes from those who ‘discovered’ this region was such that José Ribes Buigues was forced into a steep learning curve. It was one thing to set up 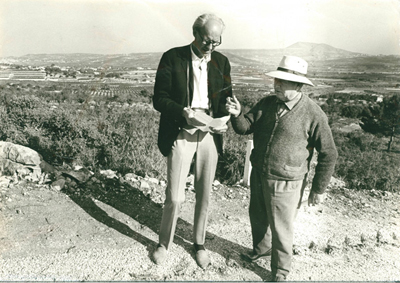 Picture of José Ribes Bas (grandfather to José, Antonio and Eduardo) showing a plot to a foreigner.

plots with the required infrastructures, another to actually construct properties. This required greater technical and construction resources, but again the Ribes’ sense of adaptability rose to the fore, as José became known not only for his creativity and technical expertise in the field of property development, but also for the integrity with which he conducted his business.

He decided to build his first villa in 1959. It was sold to a visiting German tourist the very same summer. Later in the same year he and his father bought a hectare of land and developed it to allow the construction of five villas.

The 1960s were characterised by the development of a range of different properties aimed at a growing and increasingly diverse clientele. As he built more homes, José Ribes acquired more land, becoming in the process a constructor and developer whose name was starting to be known beyond the immediate area of Jávea. 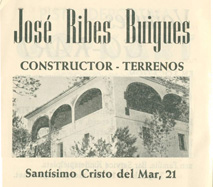 Clients both foreign and Spaniards spread the word to friends and colleagues, thus helping to promote a sector that was growing in scale and know-how. The villas constructed under the auspices of Rimontgó were increasingly refined and luxurious.

At the beginning of the 1970s José Ribes Buigues befriended a Swedish couple (Hermansenn). He set out to produce the finest properties yet seen in this part of Spain, and travelled 3,400 Km. (2,100 miles) in a Seat 850 car to Sweden to proudly present his vision in situ. He returned with a bagful of contracts.

José introduced his three sons, José, Antonio and Eduardo, to the family business in a gradual way. Starting by working in the gardens of the houses their father built, they later sat in for the company secretary during her holiday visits to relatives in the UK. Later, their father’s insistence on becoming fluent in English stood them in good stead when they were drawn upon to show prospective buyers around. In fact, the Ribes’ mother, like many other mothers, also had to participate in running the family business, in this case dealing with the rental of villas and apartments.After the founder of the

business passed away in 1979, his son and grandsons continued to run business as before.

The 1980s and 1990s period up to the present moment the company really saw Rimontgó confirmed as a major and highly respected force in the region’s real estate sector, as well as its ascendance into an internationally recognised firm.

It would, however, be untrue to say that it has all been plain sailing. As with their father, grandfather and great grandfather before them, prosperous years were interspersed with meagre ones, when hard work and single-minded determination were required simply to survive. Antonio and José ‘Pepe’ Ribes are just as proud of coming through such difficult times with their integrity intact as they are of the growth and progress achieved during the good years, remembering periods such as the oil crisis of the early 70s, the financial problems that hit Spain in 1982 and the market collapse of 1989 that followed the stock market falls. Now we are once again faced with difficult and challenging times, following the ‘discovery’ of another economic and financial crisis in July 2007.

Looked at this way the Company has been through four major national and international recessions. With the current crisis yet to play itself out they know from experience what it takes to survive such times: dogged determination, flexibility and the willingness to work harder for less and go that extra mile for your clients. Throughout it all, however, the sense of integrity and honour instilled by their father remains a constant guideline, both in good and bad times.

Today Rimontgó forms part of some of the leading international collectives of luxury real estate agents. To membership, since 1974, of the official Association of Real Estate Agents were added, amongst others, founding membership of the national luxury property organisation Nacional Premier and exclusive representation of Sotheby’s International Realty for the region of Valencia until 2004. The latter status was replaced by the exclusive representation of Christie’s Great Estates in the same region as of 2004, when Rimontgó became a founding member and driving force behind EREN - the European Real Estate Network.

The company, in the persona of José, also sits on Christie’s Great Estates International Advisory Board - an organisation made up of just eight members from around the world. Rimontgó, furthermore, is also a member of Luxury Portfolio, the Fine Property Collection and of Leading Real Estate Companies of the World, for the latter of which it is one of six members elected to its International Committee. José Ribes Bas is vice-president of EREN.

Antonio and José have taken the principles of integrity and ethics in business, dedication to clients, honesty and loyalty as inherited from their father and grandfather, and have applied these to a more modern age in which values stand out even more.

The ongoing relationship with companies such as Construcciones San Rafael and the long-serving loyalty of invaluable team members such as Penny -the very first assistant-, Pat Turner, Marisa Simón, Fina Doménech, Rosa - Antonio’s wife - and Loli Tortajada, who has been with the company since 1995, bear testament to a firm that is securely rooted in its sector and its home ground. Today, people such as Maria del Mar Bas, Rosana Morant, María Márquez, Toñi Bas, Fabiola Doménech, Cristina Martínez, David Tornero, Alicia Martínez, Margot Duncan-Etchegaray, Ignacio (Nacho) Artagoitia, Macarena Soler Valero de Palma and Mª Carmen Luis form the basis of a team that gives and receives loyalty. Imbued with the dedication to their work and their clients that made the difference for Rimontgó, they are a key part of its growth and success. Contributing to this core team are the skills of people such as Modesto Granados and Michel Cruz, amongst many other professionals, and the valued advice and friendship of colleagues such as Diane Ramirez, Benedetta and GiorgioViganò, Diana Morales, Sharon Michnay, Michael Saunders, Eric Bryn, José Miguel Martínez Medina, José Antonio Fernández Gallar and Paul Boomsma, to name a few. 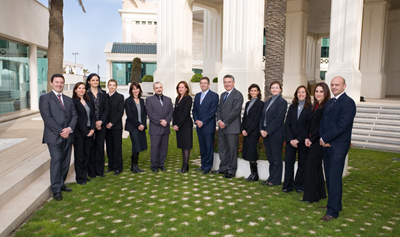 Over the years Rimontgó has won its share of both national and international awards, ranging from Most Influential Global Real Estate Leader Award 2007 to the Luxury Real Estate Best Web Site Award 2008. An even greater satisfaction, however, is to receive compliments from happy clients, to build a cohesive team whose members - bosses included - grow and learn together, building a sustainable business of which they can all be proud. For José and Antonio, every day is the continuation of a learning curve that started back in the late 1960s, when they helped out after school, and continues today as they steer the business through changing times - as ever guided by the desire to build upon the proud name and legacy inherited from the hard work of previous generations.

This is the pledge of excellence they make to their grandfather, their father, their employees, their colleagues and indeed their clients.