NEWPORT, RI - (October 30, 2008) - Paul A. Leys, Broker and co-owner of Gustave White Sotheby's International Realty was installed as the 2009 President of the Rhode Island Association of Realtors Thursday, October 30th at the Atlantic Beach Club in Middletown, RI during the Association's Annual Business Meeting and Installation Dinner. 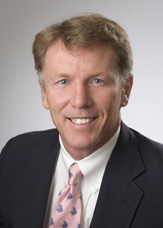 Leys, a third generation native of Newport, has been licensed since 1988 and a co-owner of Gustave White Sotheby's International Realty, Rhode Island's only Sotheby's® Affiliate, along with his business partner Christina K. West, since 2000.

Continuously active in the Realtor community, Leys was President of the Newport County Board of Realtors in 1997 and chosen as their Realtor of the Year in 1999. He also served as the 2008 treasurer of the Rhode Island Association of Realtors. Leys holds Certified Residential Broker (CRB), Certified Residential Specialist (CRS), and Graduate REALTOR® Institute (GRI) designations and is an appraiser and licensed auctioneer.

Leys will be traveling to Orlando, Florida this week to attend the National Association of Realtor®’s annual convention.

Gustave White Sotheby's International Realty is a full-service agency specializing in luxury real estate and serving all of Rhode Island as well as southeast Connecticut and parts of Massachusetts. Gustave White has been in business for over 78 years as a leader in the luxury market in Newport County and is the sole Sotheby's affiliate for Rhode Island. Gustave White offices are located at 37 Bellevue Avenue in Newport, 18 Granite Street in Westerly, and 182 Butler Avenue in Providence. Co-owners Christina West and Paul Leys can be reached at 40 1-849-3000 or at gustavewhite@gustavewhite.com.