From the Steamboat Pilot

STEAMBOAT, CO - (October 2008) -- Steamboat’s future design sensibilities are on full display 156 miles to the south of the Yampa Valley in the sophisticated homes being built in Aspen. And the influence is manifested in a new home high above Fish Creek, where walls of windows frame seldom-seen views of the Steamboat Ski Area’s northern flank.

“I go visit Aspen and Vail once or twice a year,” said Randall Hannaway, a Steamboat Springs-based Realtor with Colorado Group Realty. “They’re further along in terms of design than we are. They’re taking risks we won’t take for 10 more years.”

Hannaway and investment partner Hank Wilton, who have collaborated on other Steamboat homes, took a calculated chance last year and broke ground on a spec house that was meant to get out in front of the prevailing design trends in the Yampa Valley.

Hannaway didn’t attempt to go all the way to the aesthetics that prevail in the upper Roaring Fork Valley. His appetite for risk isn’t that robust, and Steamboat may not be ready for the linked boxes and flat roofs that are becoming more commonplace in Aspen.

“I wanted something edgy, but warm,” Hannaway said. 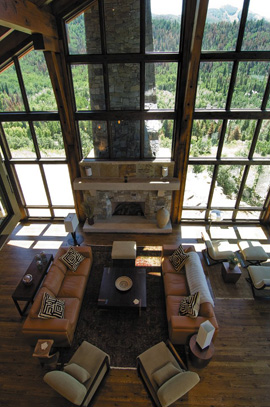 Their collaboration was rewarded this spring when the 7,000-square-foot home on Heavenly View Lane sold to a family from Georgia for $4.9 million.

So, what typifies the “edgy, but still warm” design aesthetic in Steamboat Springs this fall and winter?

Among the most dramatic elements in the home is a sweeping staircase of welded steel, which evokes an industrial loft. It would not be so effective were it not for the sheer volume of the stairwell, which affords ample room to admire the curves of the winding stairs.

Visitors to the home are immediately struck by Haradin’s unconventional interpretation of the grand foyer. Instead of relying on the predictable area rug and rustic side table, Haradin transformed the foyer into a meeting place. She placed a sliced spheroid coffee table in the middle of the large foyer and grouped four chairs of buttery leather around it. The table is an ideal spot for a large arrangement of orchids, but the chairs invite new arrivals to immediately shed ski boots and backpacks and settle in to recount the day’s exploits.

Involving Haradin early in the process, even before construction began, paid big dividends, Hannaway said. She took control of the angles of interior walls, creating a space where 90 degrees is the exception instead of the norm.

“Bringing Leslie in from the beginning was huge,” said, Annamarie Shunny, one of Hannaway’s Colorado Group Realty colleagues. “The way she made the house flow is a great benefit.”

Haradin took great pains to use walls with acute angles to make each of three master baths distinct from the other.

She credited Rangitsch for the openness and flexibility required to let a designer play with the walls of a home of his design. His firm is a likely choice for clients who seek to push the design aesthetic here to new places.

The Emerald Mountain residence, not far from Heavenly View Lane in The Sanctuary, features a three-story viewing tower in the midst of a very linear home. And the Trailside residence fit more than 11,000 square feet onto a tight, steep lot at the ski area. The home, with flat rooflines and 20-foot window walls, features an indoor swimming pool as a focal point.

Shunny said part of the architect’s challenge at Heavenly View was situating the home on a modestly sized lot in a manner that obscured views of a nearby home, while also taking advantage of the ski area views and those of distant mountains to the south.

Rangitsch said he endeavors to walk a site at different times of day in several seasons so that he can observe the way the sun and the shadows it cast move across the landscape. Such planning has practical considerations, including the way the summer sun can bake a particular wall and the way in which the low angle of the sun in winter can withhold light.

“Once the site constraints and opportunities are determined, it is time to determine how your home will fit on the lot,” Rangitsch said. “Again, the design principle here depends largely on visual elements. Should the rooms be positioned to take advantage of the views, or to minimize the impact of a negative view?”

Rangitsch’s hand on the Heavenly View home can be seen in two places where exterior walls of stone jump the barrier from the exterior to the interior. One is a fireplace of atypical — for Steamboat — quarried stone, and the second is a retaining wall that extends into the game room.

Hannaway’s proactive approach to creating high-end homes has long included a commitment to furnishing those homes, often spending six figures to ensure that prospective buyers will be able to appreciate the vision of the design team.

“You have to help them make that emotional connection to the home,” he said.