Plenty of Bay Area Home Buyers, but Why are They hesitant?

SAN FRANCISCO, CA - While April’s momentum is slightly slower in May, May sales are still only two percent below last year’s highs after double-digit declines earlier in the year.

For-sale inventory growth is slowing after the winter jump with homes averaging seven days longer on the market.

Buyer competition picks up again with 58 percent of homes selling over the asking price. 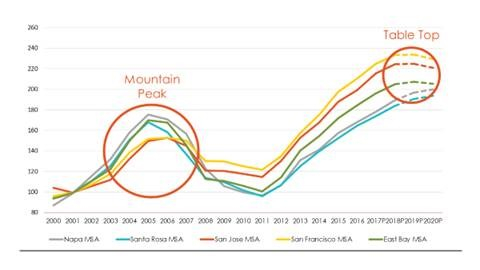 Following a solid improvement in the Bay Area housing markets in April, May homes sales activity continued with the momentum, albeit slower. Total home sales were two percent below last May, following April’s upwardly revised one percent year-over-year decline. The rate of declines has slowed considerably after double-digit declines seen in the first few months of 2019. Taking the first five months of the year together, sales are five percent below last year.

However, while declines continue to be driven by slower sales in Santa Clara and San Mateo, East Bay home sales are keeping the momentum. Napa sales jumped six percent after a six-month losing streak, averaging 20 percent annual declines. San Francisco, the spotlight of expectations around IPO impacts, remained relatively flat with last year, down one percent, though San Francisco sales peaked last May at the highest numbers of May sales in at least the last four years. Overall, most all markets except Sonoma saw improvement in sales in at least one price range. Table 1 summarizes year-over-year changes in the number of homes sold by price range. 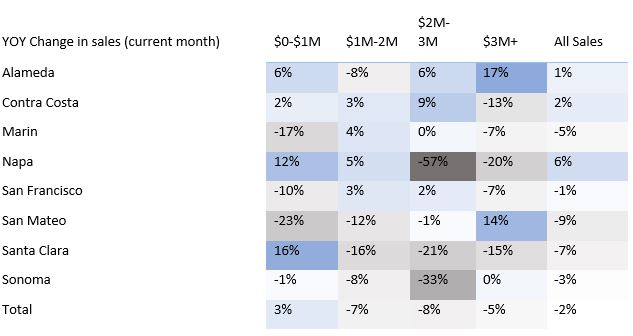 As noted in last month’s analysis, the most encouraging improvement considering Bay Area’s affordability concerns is the increase in sales of homes priced below $1 million, which showed its first two-month consecutive annual increase in the last four years. Figure 1 illustrates the trend of year-over-year changes in home sales by price range. As Table 1 suggests, the increase in lower priced sales is mostly driven by East Bay, but also Santa Clara where lower priced sales have been increasing since the beginning of the year after drops averaging 40+ percent in 2018. In contrast, San Mateo, San Francisco and Marin continued to see declines in lower priced sales as that inventory has largely disappeared – for example, in the three regions, less than a third of homes available for sale are priced below $1 million. 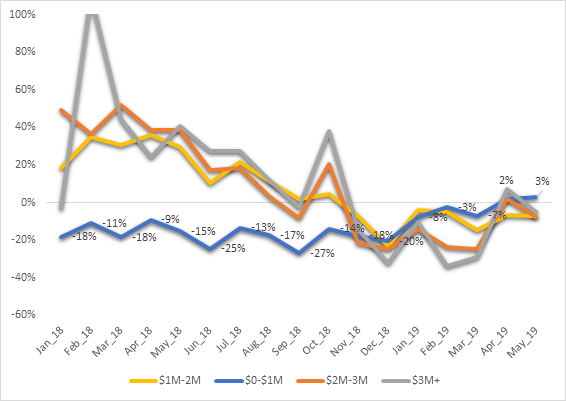 The increase in lower priced homes has been helped by raising inventories of lower price ranges. Figure 2 traces out the trends in inventory growth over the last couple of years. Currently, available inventory levels are on average 15 percent above last year with inventories priced over $3 million continuing to increase at a relatively faster pace, followed by increase in inventory priced between $1 million and $2 million. Inventory of homes below $1 million has slowed from the winter jump, but still remain at double-digit growth. Nevertheless, while inventory growth is steady, it’s largely due to homes taking longer on the market rather than new listings becoming available. The rate of new listings has fallen significantly since the winter jump, particularly for lower priced homes. To see the aging of for-sale inventories, Table 2 summarizes average days on market for homes that were still available for sale on May 31. On average, current inventory has been on the market for 47 days, or at least seven days longer than last. 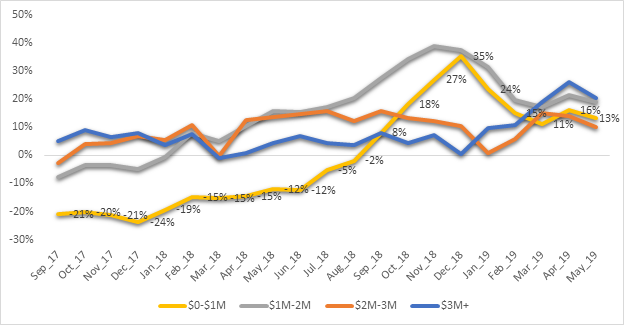 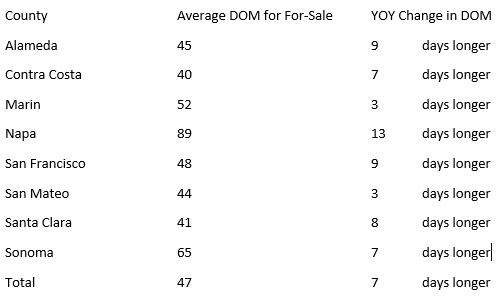 Figure 3 Share of homes selling over the asking price

As noted in the last month’s analysis, San Francisco’s housing market resilience remains further evident in absorption rates of available inventory, which is up eight percent points compared to last May and is the only area where absorption rate has increased on an annual basis. Granted, San Francisco is also the only region where inventory continues to decline, down 19 percent in May. This brings us to the question around the impact of recent and anticipated IPOs. While it doesn’t appear that San Francisco housing is bubbling out of control, it is difficult to say where it would be in the counterfactual. In other words, would the market currently be worse off or similar to where it is if it wasn’t for the IPO expectations?

In the least, it is clear that the strength of the Bay Area economy and continued job growth is driving solid demand from buyers across the region, both for affordably priced homes as well as higher-priced homes. And while the number of sales is lower than last year, it is important to keep in mind that last summer housing market activity peaked, and current conditions are suggesting levelling off or normalization of those unsustainable trends, particularly in areas in Silicon Valley or post-fire Sonoma. Further, buyers, may are holding off fearing that housing market correction is inevitable and are waiting for sellers to yield further and lower their expectations. And while recent softening of price growth suggest correction is under way, it is unlikely that it will be the correction that we saw in the last housing cycle. Credit conditions are significantly different than in the last cycle. The current housing boom was driven by exceptionally solid underwriting and significant share of all-cash purchases, coupled with almost negligible new construction growth, both of which suggest that the correction path is looking notably different. In the Pacific Union Real Estate Economic Forecast 2020, see Figure 4, we discussed the expectations around the correction path describing is as the "Table Top" - where prices will remain relatively flat or decline slightly over the next year or two. "Table Top" is unlike the "Mountain Peak" seen during the last housing cycle in 2004 to 2017 when home prices rapidly declined as much as 60 percent following the peak. 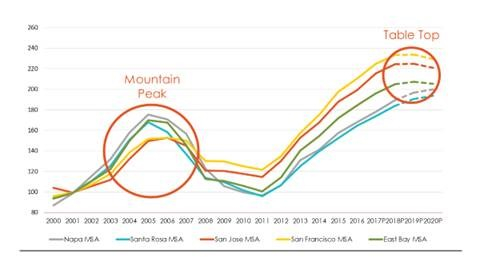