In the seaside suburbs of Tel Aviv, the market is “booming like crazy” and cranes are a common sight, as residential buildings are renovated and expanded. 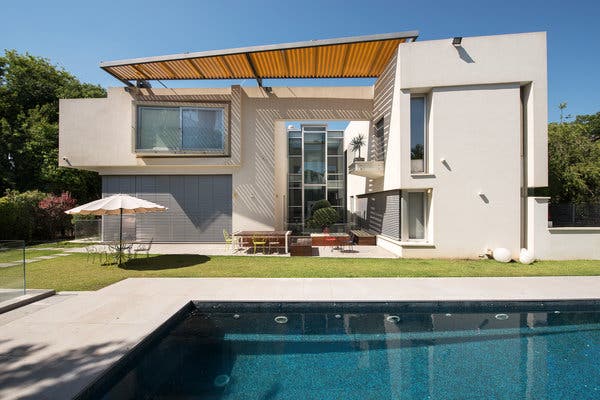 This modern three-level house, near the Mediterranean coast, is in the affluent neighborhood of Herzliya Pituach in the city of Herzliya, 10 miles north of downtown Tel Aviv. It is part of the Tel Aviv District, one of five administrative districts in Israel.

Built in 2014, with five bedrooms and four and a half bathrooms, the villa has 7,100 square feet of living space, with glass-railed balconies, patios, a four-car garage and a stainless steel pergola in the rear that extends from the roof to shade the terrace. A swimming pool, pond, firepit and Japanese garden are also on the nearly quarter-acre lot, said Eran Alayof, founder of the Alayof Group Israel, which has the listing. The house, which is situated on a flat residential street lined with other luxury homes built in the past decade, also has a smart technology system, an elevator and radiant floor heating. 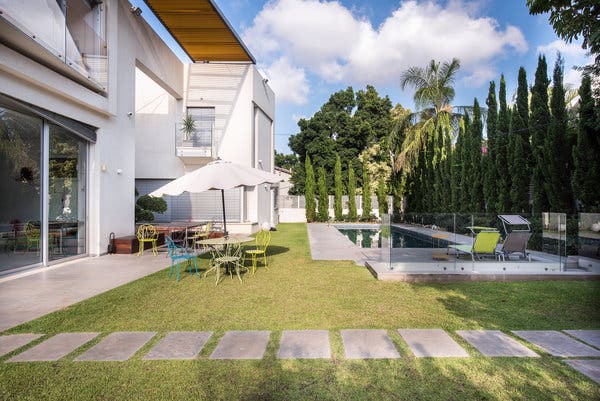 The home sits on nearly half an acre, with a swimming pool, firepit and Japanese garden. Credit...Tzachi Ostrovsky for The New York Times

Limestone floors run throughout the main level. The foyer, with its two-story wall of glass, leads to a living room with high ceilings that opens to the backyard terrace. A powder room is to one side of the foyer.

The Boffi kitchen has a glossy black walls of appliances, white perimeter cabinetry, two sinks, Miele appliances and a center island with a stainless steel counter extending to a breakfast bar. It is open to a dining room and a den with built-in red-and-yellow seating alcoves.

Up a metal-and-wood staircase, which encircles a tree suspended in a glass box, are three bedrooms, each with wood floors and an en suite tiled bath with shower, Mr. Alayof said. To the other side of the landing, the master suite includes a seating area and an office, both with broad sliding doors to balconies. The master bath has a free-standing tub, a separate shower and a double vanity.

On the lower level are a home-theater-and-billiard room; a “safe” room to be used in case of an emergency like a missile or chemical weapons attack; a den/office; a guest room; and a laundry room. Walls of glass slide open to a vine-draped, sunken patio.

The property is a five-minute drive or a 20-minute walk to a marina, shops, restaurants, bars, movie theaters and hotels, including a new Ritz-Carlton and the beachfront Dan Accadia Hotel Herzliya resort. With around 100,00 residents, the city of Herzliya has “an upscale atmosphere that makes this a great place to relax,” Mr. Alayof said. Ben Gurion Airport is a 30-minute drive from the property. 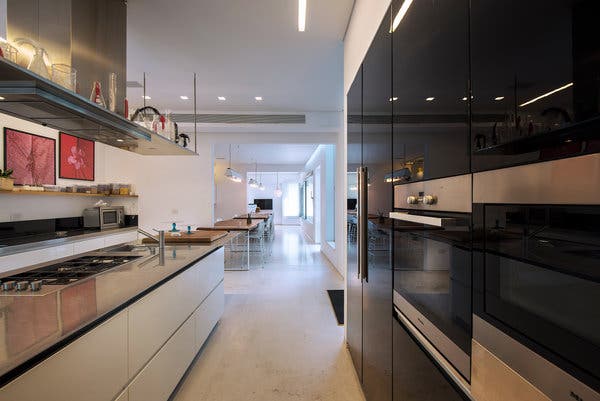 The kitchen has a wall of glossy appliances, two sinks and a center island.Credit...Tzachi Ostrovsky for The New York Times Image 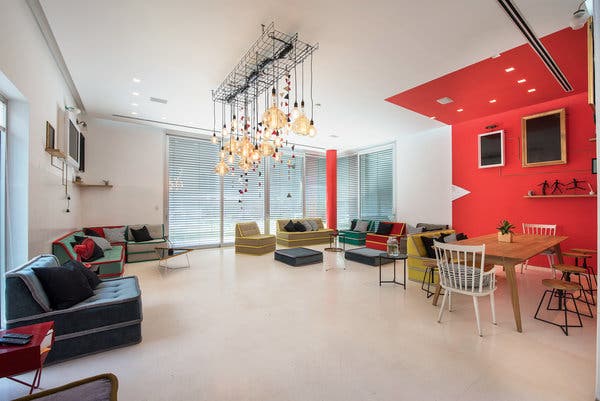 The living room has a 15-foot ceiling and sliding glass doors to the backyard.Credit...Tzachi Ostrovsky for The New York Times

The market is “booming like crazy,” said Mr. Alayof, whose family real estate brokerage works mostly with international buyers. “With what is going on in the world right now,” he said, and “anti-Semitism in the European countries, there are a lot of Jewish people who want to buy houses in Israel.”

Cranes are a common sight in Tel Aviv. Under new zoning rules, builders are renovating and earthquake-proofing 40- and 50-year-old apartment buildings, installing safe rooms and adding two or three additional floors of apartments on top, said Noam Dzialdow, an owner of Neot Shiran, a high-end real estate agency. Units in renovated buildings on quiet streets sell for as much as 4,356 to 4,719 shekels (or about $1,200 to $1,300) a square foot, he said.

Foreign buyers are drawn to condominium towers and condominium hotels along the “gold kilometer,” the Tel Aviv promenade overlooking the Mediterranean, Mr. Dzialdow said. At the new 28-story David Promenade Residences, scheduled to open next spring, prices run from 12,705 to 14,520 shekels (or $3,500 to $4,000) a square foot.

The business district along Rothschild Boulevard, where a 42-story residential tower designed by Richard Meier & Partners Architects was completed in 2017, “is considered the most desirable for whoever likes the city,” Mr. Dzialdow said, noting that prices there run from about 7,260 to 9,801 shekels (or $2,000 to $2,700) a square foot. 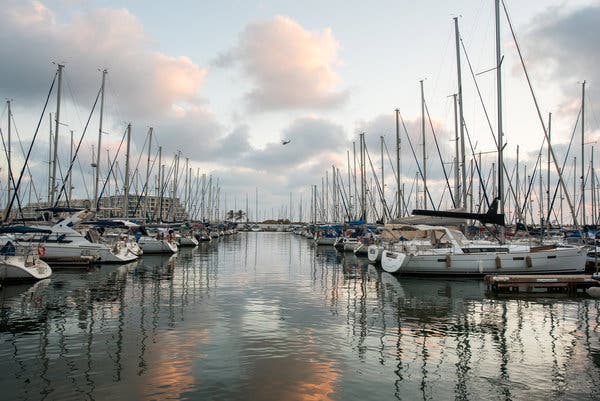 The Herzliya marina, the largest in Israel, is a short drive from the house.Credit...Tzachi Ostrovsky for The New York Times

Real estate in Tel Aviv “is always in a high demand, like Manhattan,” said Inna Fleshler, marketing communications manager of Israel Sotheby’s International Realty, citing the “unstoppable, meteoric increase” of 170 percent in price over the past decade.

Although the 2008 global downturn caused concern, the Israeli real estate market has accelerated rapidly in recent years, fueled by international buyers who “specifically chose the solid Israeli market to invest” in, Ms. Fleshler said. In 2017, the market slowed — sales volume was down 14 percent overall, and 12 percent for new developments — but prices remained constant, she said, and demand from foreign buyers continued to increase.

Who Buys in Tel Aviv

The rush of French buyers during the past decade has ebbed, and fewer buyers are coming from Russia, Mr. Dzialdow said. At the high end, South Africans are buying “because of the political situation over there,” he said, and the United States and Canada are “a solid market.” Recently, more Brazilians and Argentines have been buying in Tel Aviv, along with Swiss, Belgian and German citizens.

“Though British buyers have dwindled since the Brexit vote, due to the weak pound, buyers are coming from Australia,” said Debbie Goldfischer, the founder and owner of Buy-It In Israel, a real estate valuation and investment advisory service. Some foreigners buy when making aliyah, a migration to Israel, or because of “rising anti-Semitism, vacation, retirement planning, financial safe-haven and diversification,” Ms. Goldfischer said, adding that the current low interest rates are a factor as well.

Some buy apartments as investment rentals, while others seek vacation homes in Tel Aviv and areas north of the city like Herzliya Pituach, where villas, which make up 95 percent of the market, start at 7.26 million shekels (about $2 million) and go up to more than 72 million shekels (or around $20 million) on quarter-acre lots overlooking the Mediterranean. “It is the high, high end,” Mr. Alayof said.

Among the buyers of the country’s priciest real estate are young entrepreneurs in the flourishing tech industry in Israel.

The buyer and seller each pay a two percent real estate commission. Legal fees are typically .5 to 1 percent of the sale price.

Mortgages are available to foreigners, but lenders may require a 50 percent down payment, Ms. Fleshler said. 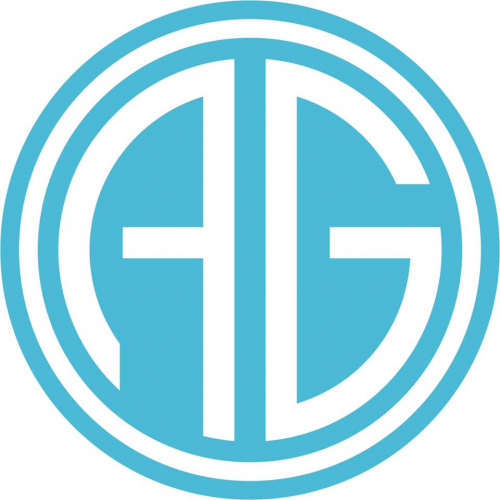