• The overall home sales decline is lower than the average 5 percent year-over-year decline seen over the last four years.

‌• Inventory levels are lower than there were in February 2016, with all regions but Alameda County declining by 9 percent, on average.

‌• Buyer open-house traffic in Marin County, however, suggests that demand is picking up.

‌• The median home price appreciation across the Bay Area increased by 7 percent on an annual basis, with relatively stronger appreciation in Silicon Valley driven by an increase in luxury home sales. 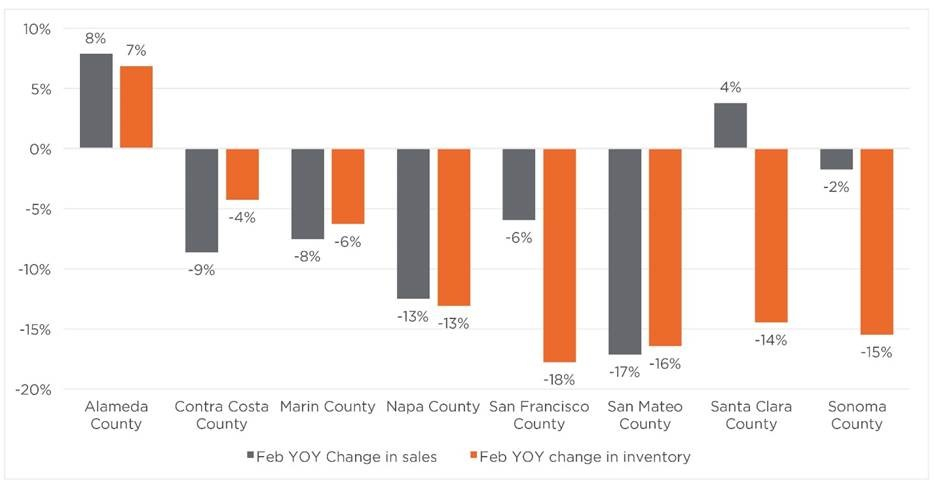 Bay Area home sales slowed again in February, falling from both January and last February by about 2 percent. Nevertheless, compared to the monthly and year-over-year changes recorded in recent Februarys, the news is not all bad. While a 2 percent month-over-month decline in February is below the five-year average of a 4 percent increase, it is lower than last February's 6 percent decline.

To recap the initial months of 2016, the volatility that shook the stock market early in the year contributed to a somewhat slower start for the housing market. At the same time, the 2 percent year-over-year decrease in February 2017 is lower than five-year year-over-year average decrease of 5 percent. Generally, the annual February declines recorded over the last four years has been slowing, which suggests a stabilizing market.

February sales were also constrained by continued inventory declines, down 9 percent from last year. Five out of eight Bay Area counties (excluding Solano) had double-digit percent declines since last February. Figure 1 illustrates year-over-year changes in home sales and for-sale inventory in February. Alameda is the only county with both improved sales and inventory activity from February 2016, while all others suffered. Santa Clara saw some pickup in home sales, largely stemming from sales of homes priced between $1 million and $2 million. 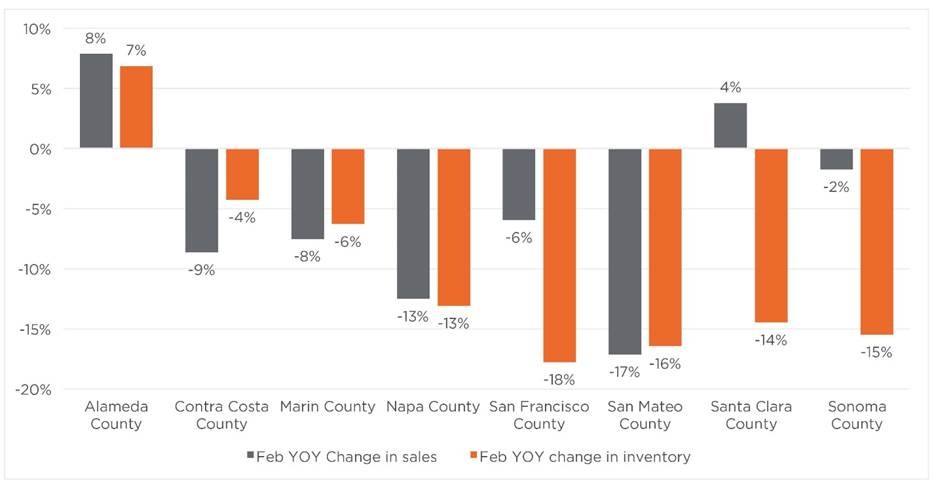 Declining inventory, however, has been an ongoing trend since 2013, with supply conditions of less than two months. As a ratio of for-sale inventory to monthly sales, the months’ supply measure could inaccurately suggest that inventory is growing when in fact sales are falling.  Either way, low inventory is unquestionably an issue that seriously impedes future improvement in the Bay Area's housing market.

Figure 2 highlights raw inventory trend by price range over the last two years. And while supply conditions move with seasonal home-buying cycles, there are two things to note. One is a substantial 72 percent decline in inventory between February 2015 and 2016. The second is 2016's decline in inventory that started relatively earlier in the year than it did in 2015. Last year, the decline in inventory started in August, while in 2015, it didn’t commence until November. There are a number of reasons for the earlier inventory decline last year, including uncertainty over the presidential election.

Nevertheless, due to continuous appreciation, some of the inventory has moved from being priced at below $1 million to between $1 million and $2 million, which is why the chart shows a higher increase in the latter price range last spring and summer. Still, with two price ranges combined, the total inventory has still been continually lower than the prior year, with an average of 5 percent fewer homes for sale over the last six months than for the same period the year before.

Figure 3: Number of homes for sale by price range

Demand for homes has not waned, though. Based on the data Pacific Union collects for open-house traffic in Marin County, the number of real buyers who visited a home increased from an average of about 11 in the third quarter of last year to an average of 18 in the first three months of this year (Figure 3). The first week of March proved particularly strong, with an average of 25 buyers visiting eight open houses. Given the lack of historical trend data on the subject, it is difficult to say whether the March increase is consistent with seasonal patterns, but it is certainly encouraging to see a gain from last summer. Better weather thus far in March may also be contributing to the increase. 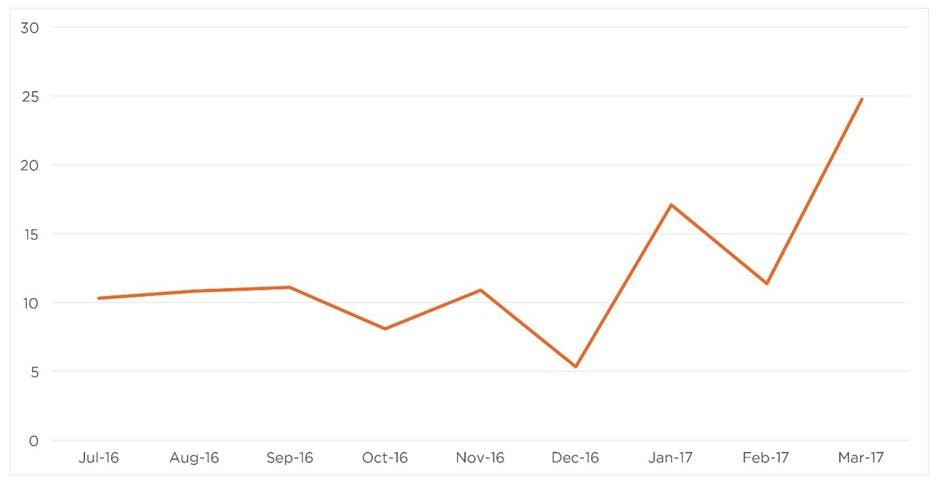 Home prices also steadily increased across the Bay Area in February, rising by 7 percent year over year, with the largest increases in Silicon Valley: 17 percent in San Mateo County and 12 percent in Santa Clara County. Silicon Valley’s large median price increase is largely due to a spike in sales of higher-priced homes, those at the $2 million and higher point. Figure 4 illustrates median prices by Bay Area counties and year-over-year appreciation rates. San Francisco’s high median price continues to weight the overall appreciation rate, while more affordable areas of Contra Costa and Alameda counties are seeing stronger appreciation, an average of 8 percent. Marin County’s median sales price slipped, but again, the drag was driven by a seven-unit decline from last February in sales of homes priced above $3 million. 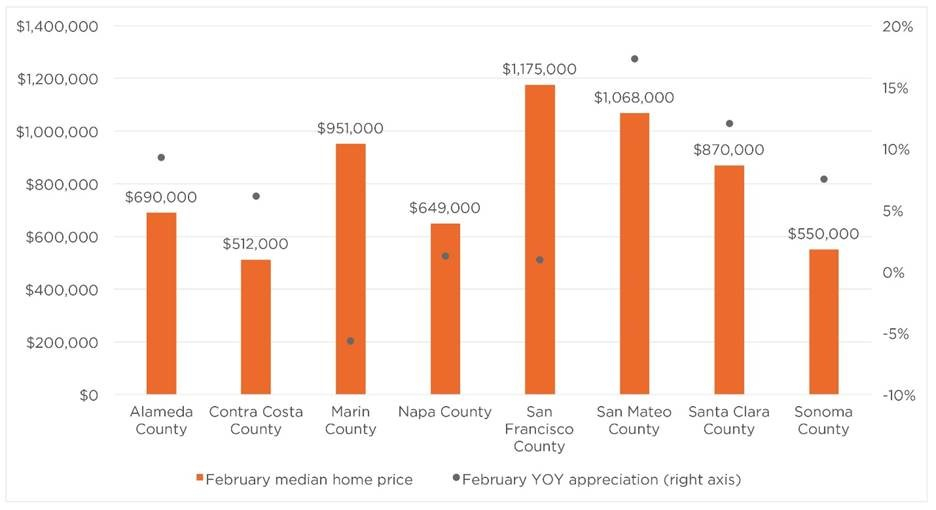 In conclusion, anticipation remains over the impacts of new administration’s policy on the Bay Area's economy and housing market. The decline in inventory has to some degree illustrated that Bay Area homeowners have decided to postpone selling their homes until more certainty is in place. And with only two months since the inauguration, it may be too early to tell what’s to come. At the very least, the inventory shortage will constrict home sales going forward and continue to put pressure on prices. If the increase in homebuyer traffic in Marin County is any indicator of demand, we should be in store for a typically busy spring.

Selma Hepp is Pacific Union’s Chief Economist and Vice President of Business Intelligence. Her previous positions include Chief Economist at Trulia, senior economist for the California Association of Realtors, and economist and manager of public policy and homeownership at the National Association of Realtors. She holds a Master of Arts in Economics from the State University of New York (SUNY), Buffalo, and a Ph.D. in Urban and Regional Planning and Design from the University of Maryland.